SFR has briefly listed details of the new Palm Pre 2 on their website, the details have now been taken down, but not before the guys over at Pre Central managed to publish them.

From the details listed on SFR, the Palm Pre 2 will feature a 1GHz processor and 512MB of RAM, it will also feature a similar design to the original Palm Pre although it will have flatter screen and a more refined design. 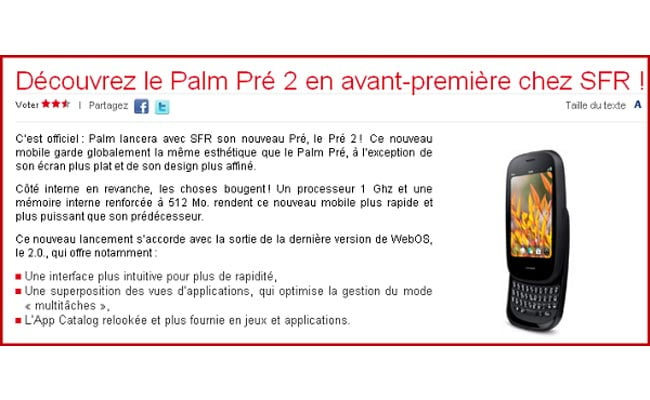 It also looks like the Palm Pre 2 will feature a micro USB port and it will come with webOS 2.0, which will offer faster boot times and enhanced features. one of the features detailed on the SFR website was Push, it seems that applications like Facebook and other apps will get Push notifications.

As soon as we get some more details on the new Palm Pre 2 we will let you guys know.

We now have some photos of the new Palm Pre 2, full details at the link below.

Photos of the new Palm Pre 2