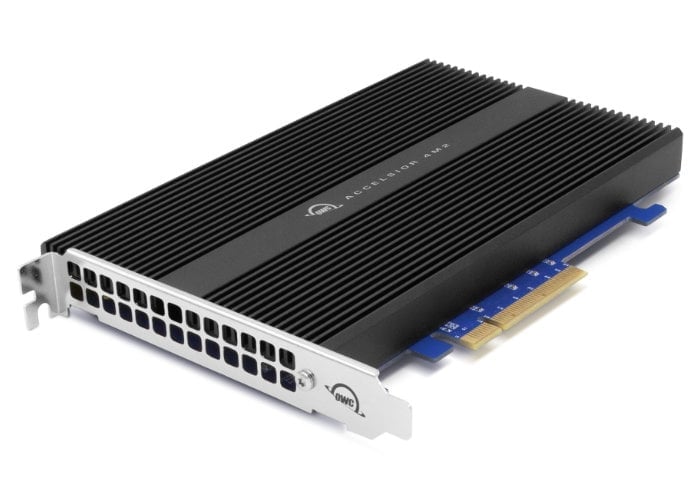 Apple has just announced the availability of the 8TB SSD upgrade option for its new high specification Mac Pro and OWC has announced the launch of its Accelsior PCIe SSD for Mac Pro offering up to 8TB with transfer speeds up to 6,000MB/s. The Accelsior 4M2 SSD is now available to pre-order in capacities from 0GB (add your own drives) starting at $249.99, or from 1TB to 8TB with pricing starting at $519.99, and will begin shipping the week of December 30th.

“Whether you have the Mac Pro 2019, a Mac Pro 2012 or 2010, or PC tower, the Accelsior 4M2 delivers the blazing performance, unstoppable reliability and stunning versatility that are the hallmarks of OWC’s brand reputation. As a half-length x8/x16 compatible card, this game-changer offers true versatility, so users can install it in full-length PCIe 3.0 or 2.0 slots as well. Even Thunderbolt 3-equipped laptops can experience the performance boosting benefits of Accelsior 4M2 with Plug-and-Play ease using the OWC Mercury Helios 3S PCIe expansion chassis (sold separately). In other words, it’s incredibly versatile.

Accelsior 4M2 was designed to address each of its four NVMe blade style drives at full x4 PCIe speeds, so whether users are running a single drive on the Accelsior 4M2 or running four in JBOD, each drive has the capability to run at full speed. Oh, and if over 6,000MB/s of real-world speed and 8TB of capacity isn’t enough to meet the task, users can RAID two Accelsior 4M2 cards together to experience out of this world exponential performance. With NVMe SSDs powering its heartbeat, Accelsior 4M2 offers the fastest data rates ever delivered by an OWC SSD. In other words, it’s insanely fast.”

Features of the OWC Accelsior PCIe SSD for Mac Pro include :