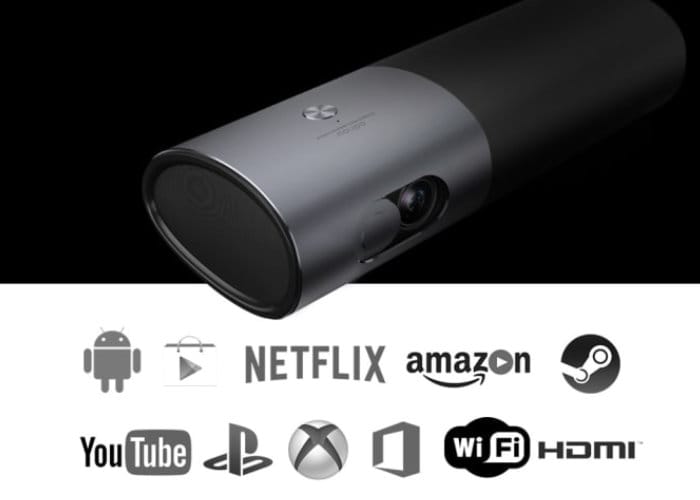 Wanbo based in New York has created a new smart home theatre projector named the Oracle which offers a high-end projector equipped with a w/ 500 ANSI Lumens capable of projecting a 180 inch picture from a device small enough to fit in your pocket. Watch the demonstration video below to learn more about the Oracle home projector which has launched by Indiegogo to raise the $20,000 it requires to make a jump into production. With super early bird pledges starting from $499 if all goes well the home projector is expected to start shipping out to backers during March 2018.

Oracle projects a massive image ranging from 50” to 180” without compromising on contrast, clarity, of picture sharpness. Using a 500 ANSI Lumen (equivalent to 3000 Lumens) OSRAM Licht AG bulb, which has a lifetime of 30,000 hours, and housing a 0.45 inch DMD to provide higher contrast, detail, and color range to always give you a well defined and bright image. Watch your favorite films on a projector rivaling all the capabilities of a Smart TV or home theatre. Built with an advanced internal hard drive and running Android 4.4, Oracle is the most advanced projector ever.

Glimpse the future with Oracle, the world’s most advanced and immersive projector. Using an Android OS to play your favorite content from Netflix to Youtube, Oracle can even mirror your phone to a display measuring up to 180”. Built with a 500 ANSI lumen bulb for excellent brightness, built-in-speakers for stereo sound, 4.5 hours of battery life and 2 USB ports, 1 HDMI port, Wi-Fi and Bluetooth capability so you can connect every device, gaming system, or stream any app.

Using the home screen you can instantly download any app or stream your favorite content flawlessly, from Netflix, Youtube, and Hulu to Microsoft Office, Steam, and even Tinder. You can even browse the internet through the built-in browser. Mirror or cast the screen of practically any mobile or tablet device (Android or iOS) via screencast. Or connect any device through Bluetooth or Wi-Fi (Laptops) or HDMI (Playstation, Nintendo Switch) and even USB (External hard drives, and thumb drives).

For more details jump over to the official Indiegogo crowdfunding campaign page by following the link below.