From first reports it looks like racers are experiencing a few technical ‘traffic congestion’ problems when trying to play their new Gran Turismo 5.

The ‘traffic congestion’ is affecting both the multiplayer games and single player as during the single player modes GT5 needs to access certain features through an online connection, that is causing gamers to become very frustrated. 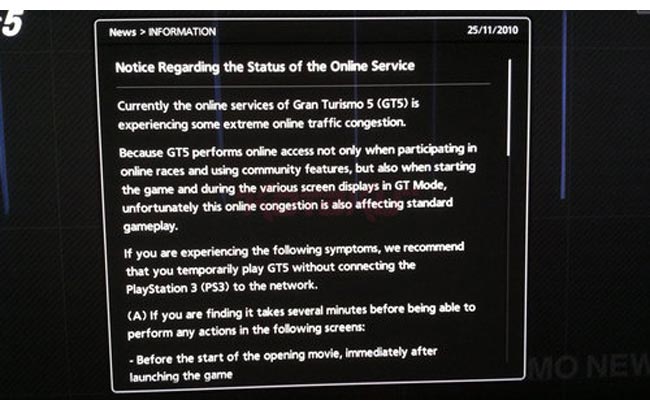 During these ‘extreme online traffic congestion problems’, users are being warned that even navigating through the games menu system can result in delays of ‘several minutes”‘, as GT5 connects online not just to race against other people, but also ‘when starting the game and during the various screen displays in GT Mode’.

Sony is currently busy trying to rectify the problems and has restricted user access to the viewing of logs, and in some cases disabled changes to user profiles and changes to friends lists as well.

The only working remedy that seems to work at  the moment is to fully disconnect your PS3 from the Internet and play the game in offline mode. Until Sony can fix the Traffic Congestion problems.

After taking so long to create hte game you think Sony would have had all its bases covered by the launch but obviously not.