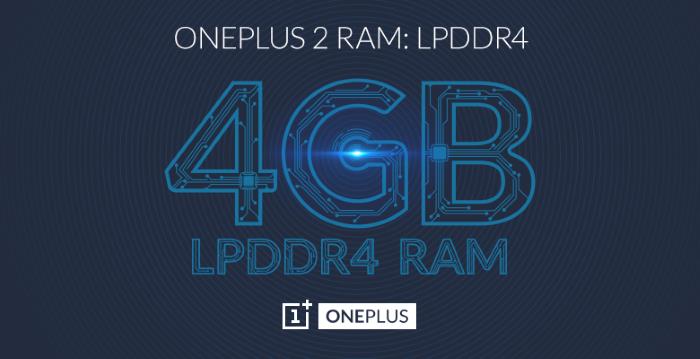 OnePlus has scheduled an event on July 27th where the company will announce its upcoming flagship device. Since then, the company has revealed a few tidbits about the upcoming OnePlus 2, a similar approach deployed by the company last year.

Recently, the company revealed that the upcoming OnePlus 2 will feature 4GB of LPDDR4 RAM on board. This will ensure smooth performance on the device for apps and other functions.

As to why the company choose 4GB LPDDR4, they say RAM is what handles the handset’s short term actions, so users will notice “faster loading times, smoother gameplay, and never-before-seen energy saving features.” Furthermore, they said,

Why did we choose LPDDR4 for the OnePlus 2? Another notable benefit is lower power consumption for better battery efficiency. That means you’ll be able to use your favorite apps (and more) without draining the battery. With LPDDR4, you get twice the bandwidth performance as the LPDDR3 at the same power consumption profile.

Previously, the company said that OnePlus 2 will come with a fingerprint sensor on board as an added security measure with the price being lower that $450. Furthermore, the handset will ship with the Qualcomm Snapdragon 810 processor — we’re hoping it will not have any overheating issues previously reported for the new processor.

July 27th is just a few weeks away, are you excited about the OnePlus 2?