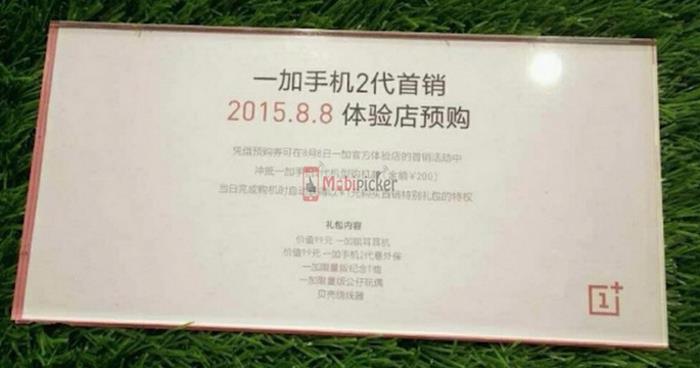 OnePlus opened its “Experience Store” in China last year in Beijing. The company didn’t only sell the OnePlus One, but offered users with a number of accessories and check out the smartphones.

The company is set to launch the OnePlus 2 today, and will follow the same old invite system. According to a new report from China, customers will be able to purchase the OnePlus 2 from the company’s Experience store in Beijing starting August 8th.

As far as the OnePlus 2 specifications are concerned, the handset is expected to come with a 5.5-inch display sporting a resolution of 2,560 by 1,440 pixels resolution, a Qualcomm Snapdragon 810 processor paired with 4GB of RAM and a fingerprint sensor as an added security measure.

The company also confirmed the handset will boast a massive 3,300 mAh battery and will come with a price tag under $450. The company has scheduled an event which will kick off later today at 10PM Eastern Time so make sure you’re not doing anything.

Hopefully, we’ll have more details about the OnePlus 2 as it gets unveiled later today. Stay tuned, we’ll update you as soon as it happens.