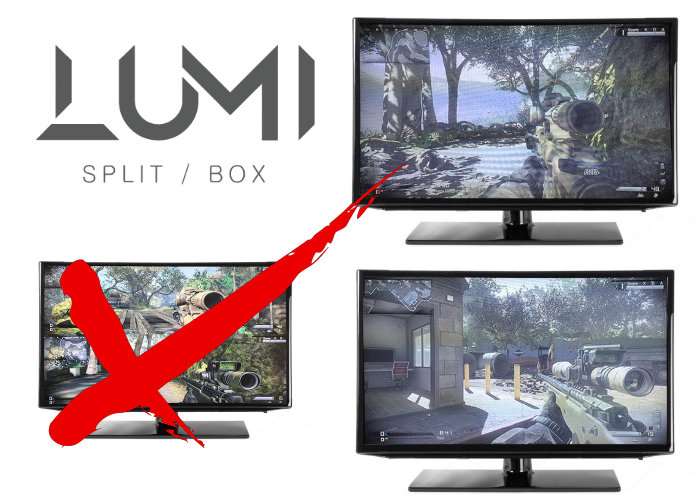 A new device has been created that allows you to play split screen games on multiple monitors and also allows you to watch the TV channels while still playing your games console on a separate monitor if desired.

More information on how the system functions check out the promotional LUMI Split-box introductory video below to learn more about the system that uses one games console and multiple TVs.

Lloyd Weaver The designer of the LUMI Split-box explains more about its inspiration, functionality and design.

I frequently found myself moving my game console between rooms to accommodate other family activities. Having to stop the game, unplug the system, move it to another room, and set it all up again seemed like an unnecessarily complicated process. In addition, when friends would come over to play games in split-screen mode, I would catch them looking at my screen to gain an advantage. To eliminate these issues, I designed the LUMI Split-box so players can play from separate screens with one console. With the LUMI Split-box, I don’t have to move my entire gaming system when my boys want to see a show, and I don’t have to worry about my gaming partners cheating. Now, if they win, it’s because they are actually better than me! An extra bonus is the full-screen HD experience. It’s great!

LUMI Split-box technologies gives game boxes such as PS4, XBOX, Wil, and others the ability to split their gaming screens from one single split-screen to dual screens. Our roadmap includes multiple screen game play that could be professionally shared in gaming competitions utilizing one game console.

I currently have a functioning LUMI Split-box prototype with a patent issued in 2016. This fundraising drive will allow me to add streaming capabilities and go into production. With the streaming service, the LUMI Split-box will be able to broadcast the same stream to multiple screens simultaneously, with no extra hardware needed. LUMI Split-box offers a truly one-of-a-kind experience!

Lloyd has this week launched LUMI Split-box by the Kickstarter crowdfunding website to raise $100,000 he requires to take his device into production. If all goes well shipping is expected to start during November 2017. For more details and full specifications jump over to the Kickstarter website via the link below.