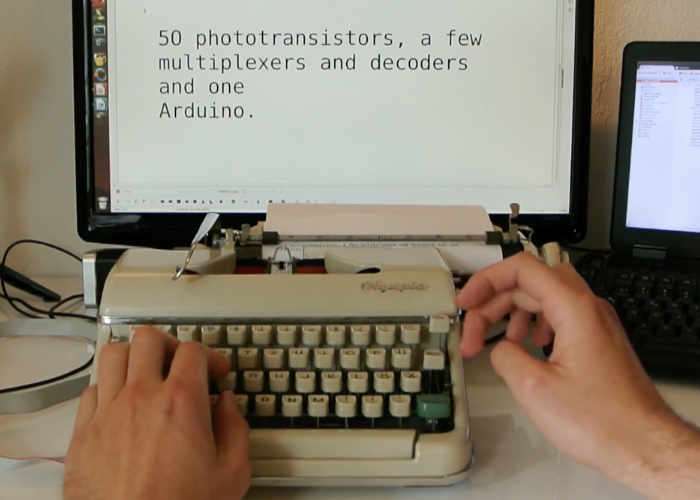 Makers and Arduino enthusiasts that have access to an old typewriter, may be interested in this new project which breathes life into an old analogue typewriter by transforming it into a digital keyboard.

Watch the video below to learn more about the project which uses a PCB with phototransistors that sense when the linkages for each key are pushed down thanks to the addition of an Arduino Leonardo.

I modified a vintage type writer to function as a USB keyboard using an Arduino and 50 phototransistors. The typewriter is a German Olympia Monica that I bought at a local flea market. For this project I created a simple PCB that carries the phototransistors and several multiplexers and decoders. The PCB is connected to the Arduino through a ribbon cable. I used an Arduino Leonardo, which can function as a USB input device.

I created the PCB design with the EasyEDA web application. I don’t guarantee that the design is functioning. The original design had quite a few errors that I fixed manually. They should be corrected in this version, but I haven’t tested it. I didn’t end up populating P3, J1 and C1. I guess the number of 220 Ohm resistors could be significantly reduced.