No Bluetooth, but there’s an audio input jack on its side for a connector. Currently selling for an affordable 25 quid, the Cardboard Radio looks like it was put together by a survivalist, as it’s bereft of any frills or sleek design. It works fine, however, and can actually be considered disposable. 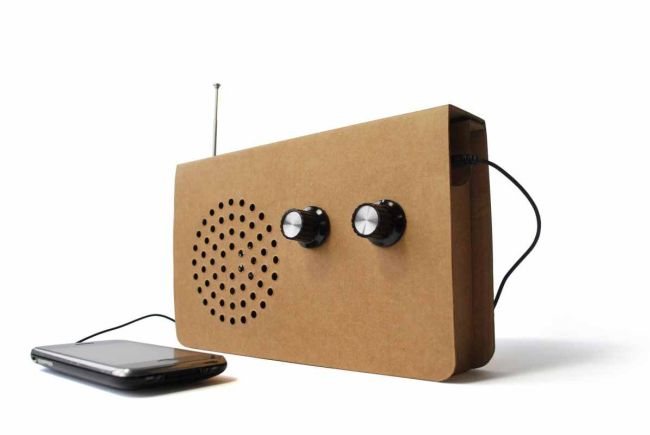 Powered by 4 AA batteries and lasting long enough before the elements wear away its cardboard exterior, the Cardboard Radio is a marvel of technical ingenuity and a design revolution in the making.

How come? It’s cardboard and works well, and probably might even be usable on other gadgets. Imagine if manufacturers started churning out cardboard laptops, TV sets, and even ovens. No, not ovens–bad idea! But basically a whole lot of disposable and recyclable appliances and gadgets. That would be awesome, if a bit weird. On the plus side, hacking your gadgets would be much easier.

That’s the real novelty with the Cardboard Radio. It’s so simple, any slightly savvy geek with a penchant for breaking stuff open could mess around with its different parts and create something new.

If you’re wondering if this Cardboard Radio even bothered with a design process, why it actually did. The guy’s name is Christopher McNichol and by the looks of it, he’s drawing from Dieter Rams. We recognize the extreme minimalism.