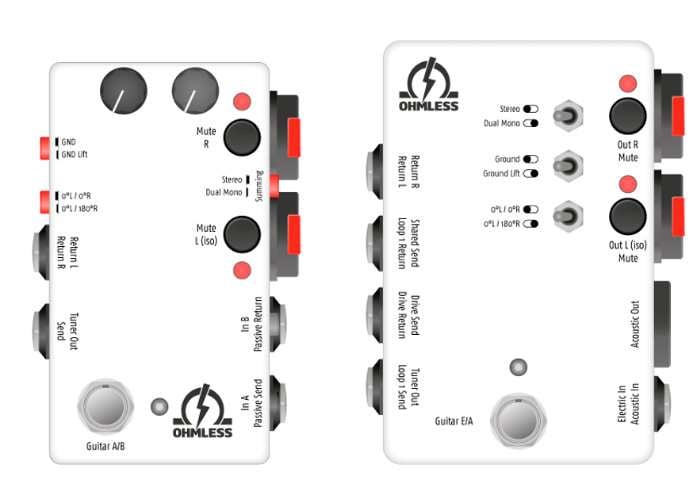 Ohmless Pedals have this month unveiled their new Ohmless MultiTool pedals which have been specifically designed for musicians that are playing more than one electric guitar or for combined electric/acoustic setups.

Check out the demonstration video below to learn more about the features and functionality of the Ohmless MultiTool Guitar Pedals witch of launch via Kickstarter this month to raise the €12,500 the Munich, based team of developers need to progress into production.

German manufacturer Ohmless Pedals explains more about the new guitar pedals which are available to back with pledges starting from €189 and delivery expected to take place during November 2017.

Ohmless MultiTool Electric will be the ultimate solution for your electric guitar pedalboard setup. Two inputs, each with a switchable transparent boost (up to 15dB of clean headroom), will help you adjust the signal levels of different guitars or function as a preamp. It offers a high quality OpAmp buffer and also an unbuffered loop for pedals that are sensitive to a buffer. Additional features are an isolated output, ground lift, phase inversion, muteable outputs and active stereo to dual mono summing (no loss in volume).

Why do I have to mute the outputs separately you ask? Well – imagine this scenario: You’re running a stereo setup and one of your amps starts to break and makes weird noises. You can now switch to dual mono and mute the broken amp channel. There will only be a signal on your good amp and the broken one stays silent. Another scenario is, if you only want to use one amp during a gig for a defined period of time. Just hit the summing button and mute the amp that isn’t needed. It’s that easy.