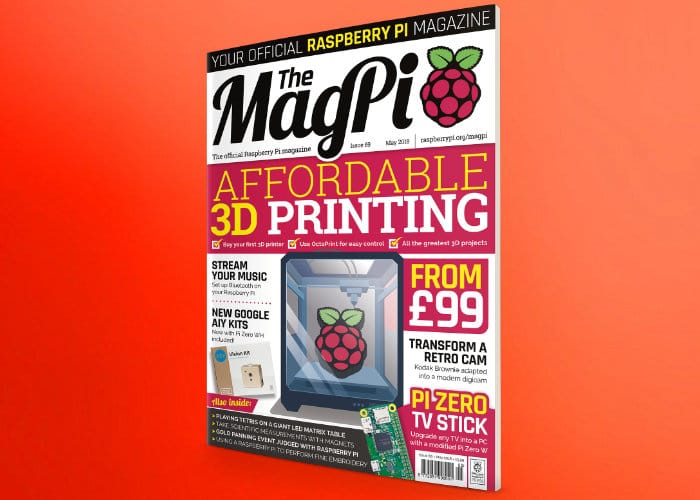 “Affordability is always a big factor when it comes to 3D printers. Like any new cosumer tech, their prices are often in the thousands of pounds. Over the last decade, however, these prices have been dropping steadily. Now you can get budget 3D printers for hundreds rather than thousands – and even for £99, like the iMakr. Pairing an iMakr with a Raspberry Pi makes for a reasonably priced 3D printing solution. In issue 69, we show you how to do just that!”

Other features in this month’s issue include different ways to make your Raspberry Pi mini PC portable as well as instructions on how you can build your very own Raspberry Pi TV Stick and plenty more. Issue 69 of the MagPi magazine is available from WHSmith, Tesco, Sainsbury’s, and Asda in the UK. If you live in the US, from Barnes & Noble or Micro Center in the next few days in print. Although the Raspberry Pi magazine is also available as a digital copy both directly from the online store and via the Raspberry Pi magazine apps for iOS and Android. Don’t forget, there’s always the free PDF as well, For more information jump over to the official Raspberry Pi Foundation website by following the link below.