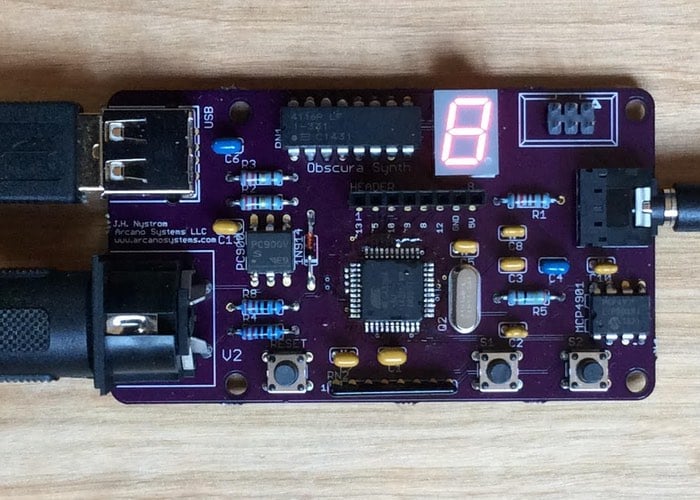 Following on from their first Kickstarter success, Arcano Systems has this week launched another campaign to crowdfund their new Obscura MIDI 8-bit NES & C64 Chiptune synthesiser which requires just $2,000 to go into production.

The Arduino compatible 8-bit MIDI synthesiser has been specifically designed to aid with the creation of Nintendo, C64, and Amiga-style chiptune music.

Check out the video below to see just how easy it is and the results you can expect. Its developers explain a little more about its features and functionality.

Obscura is an Arduino-compatible 8-bit synthesizer that allows you to create NES, C64, and Amiga-style chiptune music by simply connecting a MIDI device.  No programming is required. This monophonic MIDI synth comes programmed with software that includes 16 preset patches.

Users with programming experience will be able create their own custom software for Obscura using the Arduino IDE. (Obscura is based on the Arduino Leonardo platform.) Arduino pins 5, 8, 9, 10, 12, and 13 are broken out for hardware hacking and experimentation. Due to Arduino Leonardo’s native USB capabilities, the Obscura Synth can be programmed to appear as a USB mouse, keyboard, or HID, enabling interesting possibilities of unique MIDI-PC interface applications.

Unlike many other microcontroller-based synthesizers, which use pulse-width-modulation (PWM) to generate weak, noisy, low-quality audio signals, the Obscura uses an auxiliary digital-to-analog converter chip with true 8-bit quantization to produce a clear, high-quality audio signal. The Obscura is USB powered and does not require a special wall adapter with a barrel-jack type connector. The simple user interface consists of two patch control buttons, a reset button, and a 7-segment LED display. Audio is output via a standard 1/8” (3.5 mm) stereo audio jack. (Although primarily designed to be a line out, the audio output can supply enough current to drive most headphones.)

For more information on the new Obscura MIDI 8-bit synthesiser jump over to the Kickstarter website for details and to make a pledge from just $95 to be one of the first to get your hands on one.