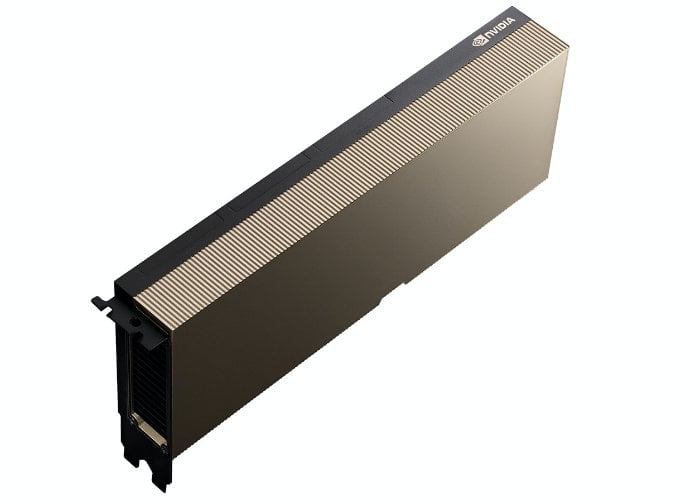 A number of hardware manufacturers have today unveiled NVIDIA A100-powered systems in a variety of designs and configurations to tackle the most complex challenges in AI, data science and scientific computing. Availability of the servers varies, with 30 systems expected this summer, and over 20 more by the end of the year.

“Adoption of NVIDIA A100 GPUs into leading server manufacturers’ offerings is outpacing anything we’ve previously seen,” said Ian Buck, vice president and general manager of Accelerated Computing at NVIDIA. “The sheer breadth of NVIDIA A100 servers coming from our partners ensures that customers can choose the very best options to accelerate their data centers for high utilization and low total cost of ownership.”

Server manufacturers bringing NVIDIA A100-powered systems to their customers include:

– ASUS will offer the ESC4000A-E10, which can be configured with four A100 PCIe GPUs in a single server.
– Atos is offering its BullSequana X2415 system with four NVIDIA A100 Tensor Core GPUs.
– Cisco plans to support NVIDIA A100 Tensor Core GPUs in its Cisco Unified Computing System servers and in its hyperconverged infrastructure system, Cisco HyperFlex.
– Dell Technologies plans to support NVIDIA A100 Tensor Core GPUs across its PowerEdge servers and solutions that accelerate workloads from edge to core to cloud, just as it supports other NVIDIA GPU accelerators, software and technologies in a wide range of offerings.
– Fujitsu is bringing A100 GPUs to its PRIMERGY line of servers.
– GIGABYTE will offer G481-HA0, G492-Z50 and G492-Z51 servers that support up to 10 A100 PCIe GPUs, while the G292-Z40 server supports up to eight.
– HPE will support A100 PCIe GPUs in the HPE ProLiant DL380 Gen10 Server, and for accelerated HPC and AI workloads, in the HPE Apollo 6500 Gen10 System.
– Inspur is releasing eight NVIDIA A100-powered systems, including the NF5468M5, NF5468M6 and NF5468A5 using A100 PCIe GPUs, the NF5488M5-D, NF5488A5, NF5488M6 and NF5688M6 using eight-way NVLink, and the NF5888M6 with 16-way NVLink.
– Lenovo will support A100 PCIe GPUs on select systems, including the Lenovo ThinkSystem SR670 AI-ready server. Lenovo will expand availability across its ThinkSystem and ThinkAgile portfolio in the fall.
– One Stop Systems will offer its OSS 4UV Gen 4 PCIe expansion system with up to eight NVIDIA A100 PCIe GPUs to allow AI and HPC customers to scale out their Gen 4 servers.
– Quanta/QCT will offer several QuantaGrid server systems, including D52BV-2U, D43KQ-2U and D52G-4U that support up to eight NVIDIA A100 PCIe GPUs.
– Supermicro will offer its 4U A+ GPU system, supporting up to eight NVIDIA A100 PCIe GPUs and up to two additional high-performance PCI-E 4.0 expansion slots along with other 1U, 2U and 4U GPU servers.