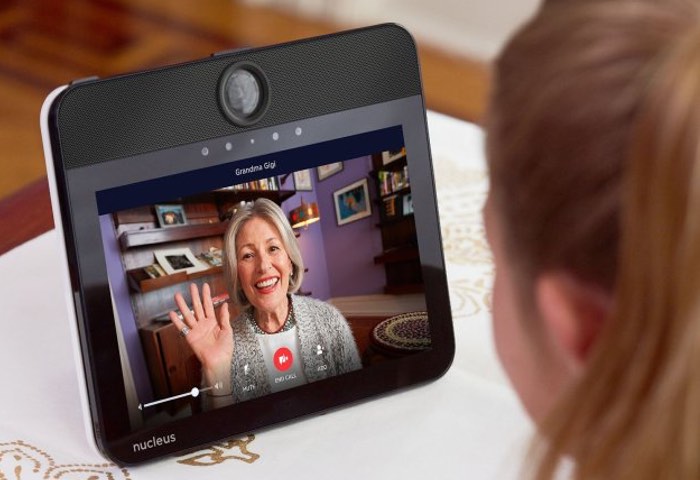 A new Amazon Alexa equipped communications hub has been unveiled this week in the form of the Nucleus which takes the form of a next-generation intercom and provides users with an easy way of staying in touch and also using Amazon’s Alexa voice service for updates, information and news.

The desktop Nucleus system is equipped with an 8 inch touchscreen display together with a wide-angle camera, stereo speakers and support for connectivity via either ethernet or wireless whichever is more convenient.

The system allows you to either communicate with other people within your household or those further afield using an Internet connection. Features of the Nucleus intercom include a five megapixel 120 degree camera together with support for streaming services such as Amazon Prime Music, TuneIn, and iHeartRadio all of which are controlled by Alexa.

We wanted a better way to keep an eye on the kids in the next room and a way to get them to the dinner table without yelling across the house. A better way to stay in touch with each other at home and with our favorite people far away. Something simple to use and easy on the eyes, that doesn’t compromise the college fund or require rewiring the whole house.

Despite our tireless searching, we realized that nothing satisfied our needs. So that’s why we made Nucleus: a new kind of intercom, built for the 21st century and the modern family who want to stay close and replace the home life grind with a laugh and a high five and a “just wanted to say hi!”

The Nucleus is now available to purchase price to $249, although if you purchase two or more units the price drops to just $199 each. For more information on the new Nucleus intercom system equipped with Amazon Alexa jump over to the official website for details via the link below.