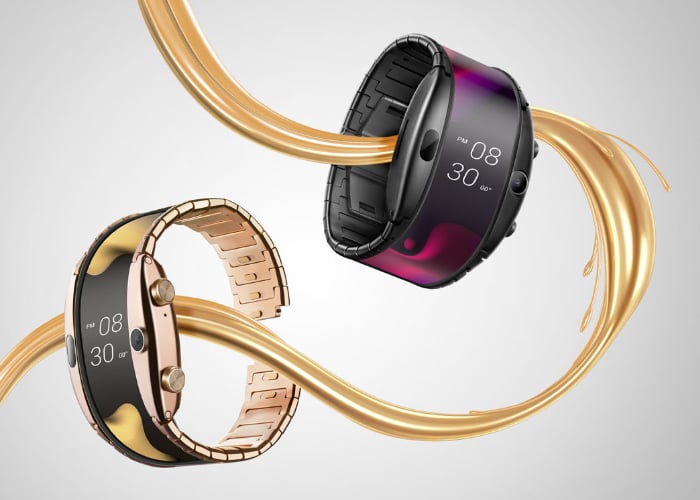 After first being unveiled back in IFA 2018 Nubia’s Alpha curved screen wearable smartphone has been launched at this year’s MWC 2018 conference. The wearable smartphone will be available in three different versions Bluetooth-only model in black finish for €449 or roughly $510, a 4G eSim variation also in black priced at €549 or $623 and a 4G eSim alternative coated in 18-karat gold for €649 or $737.

The design of the curved screen wearable smartphone is a strange concoction of protruding camera lenses, crowns and bulges. Equipped with a four-inch OLED curved screen manufactured by Visionox, offering users a resolution of 960 x 192 pixels.

The Nubia Alpha smartwatch is powered by a Qualcomm’s Snapdragon Wear 2100 together with 1GB of RAM, 8GB of internal storage and a 500mAH battery, capable of powering the smartwatch for up to 48-hour is on a single charge depending on usage.

Other features include connectivity via Bluetooth, WiFi and 4G eSIM support, enabling you to text, call browse the web when a conventional smartphone is nearby. The on-board camera is equipped with a five megapixel sensor and takes the form of an awkward bulge on the front, right side of the watch face. For more details, full specifications and purchasing options jump over to the official Nubia website.