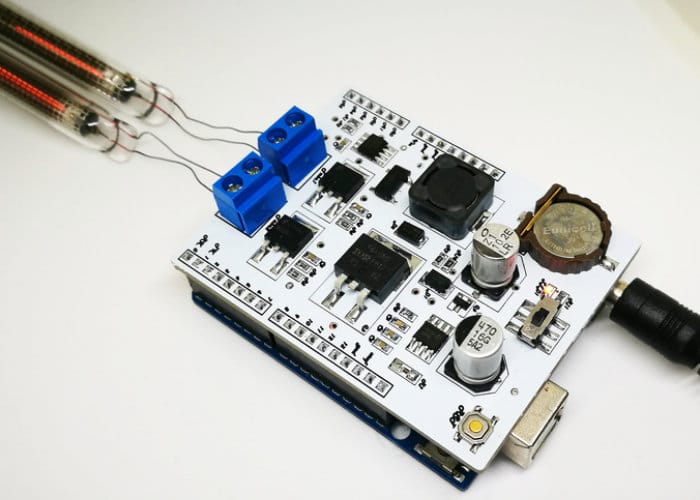 Makers considering building a Nixie tube clock, may be interested in a new Arduino shield which has been specifically created to make building a nixie tube clock and easier process. The Nixie Clock Arduino Shield is equipped with a real-time clock for driving 2x IN-9 Nixie bar graph tubes. What the demonstration video below to learn more about the Arduino shield which has this week taken to Kickstarter to raise the required funds it needs to make the jump into small-scale production.

If you are ever trying to create a project using Nixie tubes you will already know how difficult they are to control with today’s electronics, requiring high voltages to be able to drive the retro technology. The shield is compatible with a wide variety of different micro controllers. Robin the developer of the nixie clock Arduino shield explains more about the nixie tube technology “IN-9 Nixie bargraph tubes are a 1960s display technology. Before the advent of LEDs, indicators were made by neon gas discharge tubes. The bargraph tube is a special type of Nixie tube: instead of illuminating a number, letter or symbol, it glows to different heights depending on the current through the tube. This feature means it can be used to indicate any variable, such as temperature, time, internet speed, or atmospheric pressure. If it varies, you can display it!”

The Nixie Clock Arduino Shield is now available to back via Kickstarter with pledges available from £30 which includes the IN-9 Nixie Clock Shield as well as two IN-9 Nixie tubes to help create your first project.