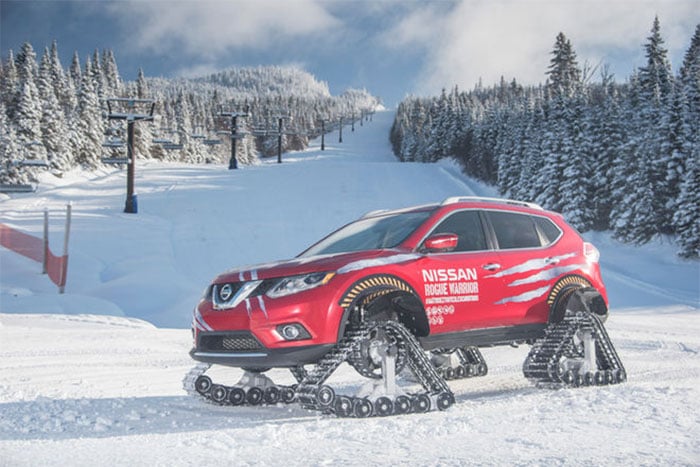 The new Nissan Rogue has been around or a couple model years now and it still looks like a very nice little SUV. This particular Rogue is far from the norm replacing its wheels with cool tracks that let it get around in the snow with ease. It’s sort of like a cross between an SUV and a Snowcat. Nissan has dubbed the car the Rogue Warrior and it debuted at the Montreal International Auto show.

The Rogue was converted by a Quebec firm called Motorsports in Action using a Dominator track system from American Track Truck. Each of the snow tracks used on the Rogue are 30-inches high and 48-inches long. Each of those tracks is 15-inches wide giving plenty of snow gripping power.

The suspension for the Rogue had to be adjusted to accept the snow tracks and the system is used in a factory AWD Rogue. The CVT transmission and AWD system are completely stock. The truck can drive up to 62mph and tame grades up to 45-degrees in groomed snow. Ground clearance is 23-inches. Rogue Warrior has been used to tow skiers up mountain slopes and looks really cool doing it.