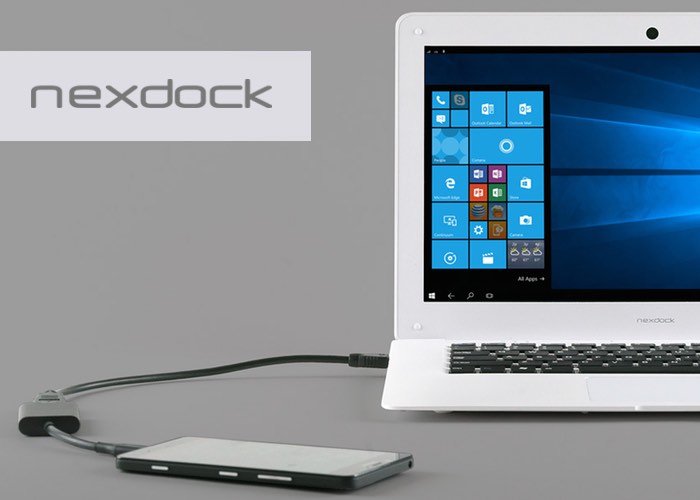 After raising over $360,000 earlier this year thanks to a successful Indiegogo crowdfunding campaign during which over 2,600 backers help take the NexDock into production.

The company behind the system that transforms a Windows 10 smartphone, mini PC such as the Raspberry Pi or tablet into a laptop PC with full QWERTY keyboard, has today announced shipping of NexDock has started to backers.

Recently there has been a spate of failed crowdfunding campaigns hitting the news, so it’s always great to hear about the success stories from companies such as NexDock, based in the US. Who have been able to take backers funding and create a successful business and ship a finished product.

Check out the videos below to learn more about the NexDock “a revolutionary laptop that harnesses the productivity of smartphones, tablets and mini PCs by adding a bluetooth keyboard, a capable battery and a 14-inch screen”.

Use NexDock with the latest Windows 10 mobile devices (such as the Lumia 950) and take advantage of the new Continuum feature, allowing smartphones and tablets to switch between touch and desktop modes. iPhone and Android users can utilize of the mini HDMI port or wireless adapter for a substantial screen size and productivity upgrade.

You can also use NexDock as a secondary monitor for your laptop to set up a multi-screen workstation when traveling. Perfect for Ultrabooks and MacBook Air! It doesn’t stop here. Thanks to mini HDMI-in port — the innovative NexDock let you get the most out of many other devices just plugging. Connect NexDock with the world’s smallest PCs, for a cost-effective computer on the go.

For more information on the new Nexdock and to learn when they will be available to purchase jump over to the official website for details via the link below.