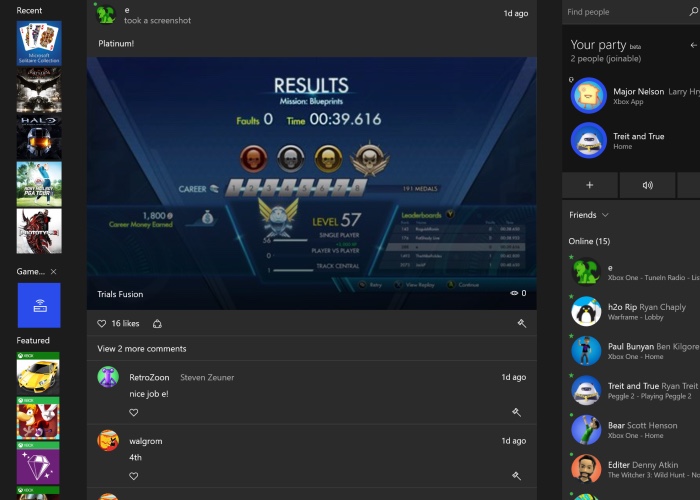 Microsoft today over on the Major Nelson website has detailed the features that you can expect to enjoy on the Xbox One, when their latest Windows 10 operating system launches in just a few days time.

Windows 10 will be officially launching worldwide on July 29th and Microsoft is offering a number of free upgrade options if you already own Windows 7 or Windows 8.1 already.

In the latest update Microsoft has detailed more information about the game streaming functionality that was first unveiled last month and has now made is available to all. Microsoft explains a little more.

We’re ramping up more gaming and social features on the Xbox App on Window 10, too, giving you more and better ways to access your gaming world and connect with your friends and the Xbox Live community.

We’re taking the game streaming function on Xbox One, as announced last month, out of preview and expanding it to everyone who owns an Xbox One and has a PC or tablet with Windows 10. This means you can play the great library of games you’ve built for Xbox One on your Windows 10 PCs when you’re not in front of your console.

Above the Friends list is a new option labeled Start a party (beta). This enables you to start a party chat or game chat with your Xbox friends across Xbox One and Xbox on Windows 10. Press ‘+’ to invite friends, and simply click on your friends to invite them to an online party.

The app will support automated discovery of Windows Store games and a large number of older non-Windows store PC games so they get added automatically to your game collection within the Xbox app upon first launch.

For full details on all the new features you can expect to enjoy by linking your Xbox one to your Windows 10 computer jump over to the Major Nelson full details via the link below.