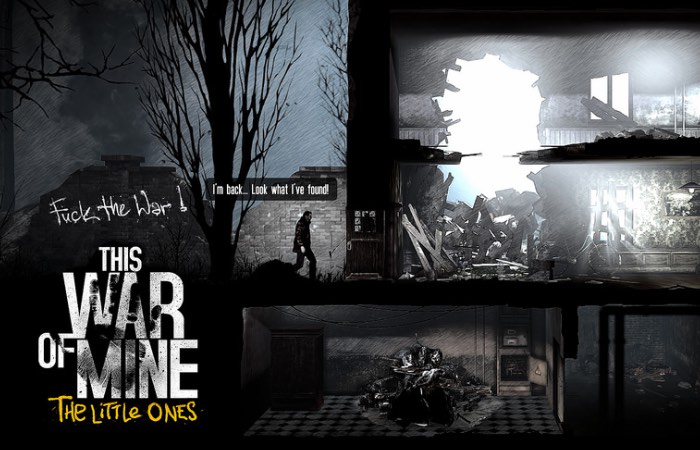 The new trailer has been released this week by 11 bit studios providing a glimpse at what you can expect from the new This War of Mine The Little Ones gameplay on Sony’s PlayStation 4 games console.

This War Of Mine provides an experience of war, not from an elite soldier but from a group of civilians that are trying to survive. Struggling with a lack of food, limited or no medical supplies and constant danger from the world around, players will need to make life-or-death decisions to make it through another day. During war, there are no good or bad decisions; only survival.

It’s already winter, and you start to feel unwell. Bruno — one of the guys who joined your little group and who initially seemed a bit selfish — gives you some medication after you ask him for help. It’s the very last bit of medicine, let´s hope you feel better. If not, someone will have to go and get some more in the cover of night. After that, Bruno tries to cook something from the last pieces of food he has on an improvised stove.

Later, you get bored but your father told you to stay in the shelter because it’s too dangerous outside. What do you do? Hey, maybe you could run up and down the stairway? It gets boring after a while. Let’s play some hopscotch then.

Something feels bad. You notice your father is sad. The other folks also seem a bit down. You realize that things may end up badly. They act normal but they know the truth. And as energetic as you are, those bad feelings sneak into your mind, too. You feel like talking to your Dad. You want to hear something good, have a glimpse of your old good life. Dad always knows how to cheer you up. It’s not that bad outside especially when he finds a moment to play rock-paper-scissors with you, right? Dad is trying to fix a broken wooden bed — the only bed in the building, for you, so at least you don’t have to sleep on the cold floor.