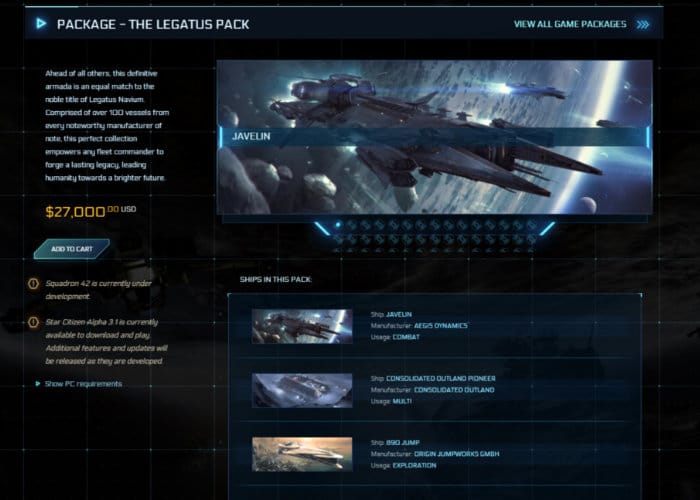 If you take your space simulation seriously and have plenty of cash to burn you may be interested to know that the creators of space simulation game Star Citizen have announced a new package which is available providing 117 ships and 163 extras for $27,000 in the Legatus Pack. Although you will needed to have spent over $1,000 previously in the game to be eligible to even view the package advertising page for the Legatus Pack.

Samuel Horti from PCGamer explains his thoughts on the staggering price tag for the new Star Citizen Legatus spaceship bundle. “I suppose if any game will tempt fans to spend the kind of money that’s normally reserved for buying a real-life car on in-game items, it’ll be Star Citizen. It has raised nearly $200m from crowdfunding since it launched a Kickstarter in 2012, and it’s still pulling in big money—fans poured $35m into it last year alone, which was double the amount raised by all video game Kickstarter projects combined in the year. It also started selling virtual plots of land for $100 a pop.”

For more information jump over to the Roberts Space Industries website where more details are available for the $27,000 Legatus Pack. If you are interested in purchasing the bundle but haven’t already spent $1000 in game you will need to contact the Star Citizen customer support department to be able to purchase.