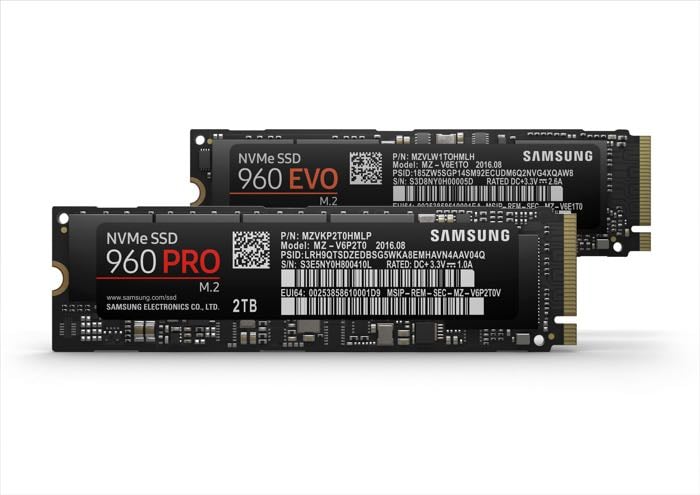 Samsung has announced two new solid state drives the Samsung 960 Pro and Samsung 960 Evo and according to Samsung they are the world’s fastest M.2 NVMe- SSDs.

The new Samsung 960 Pro and EVO solid state drives will launch in a range of storage sizes, the EVO in 250GB up to 1TB and the Pro in sizes up to 2TB.

The 960 PRO and 960 EVO SSDs redefine the personal computer performance, in part attributed to new controller which raises the bar of consumer SSD performance. The 960 PRO delivers peak sequential read and write transfer speeds of 3,500 MB/s and 2,100 MB/s, respectively, and random read and write IOPS of up to 440,000 and 360,000.1

On top of being the world’s fastest M.2 NVMe- SSD, the 960 PRO will also offer 2 terabyte (TB) capacity, which is the highest capacity commercially available for M.2 NVMe SSDs, along with 512GB and 1TB versions.2 The 960 PRO’s high density was made possible by Samsung V-NAND technology and the uniquely restructured package design. As user capacity demand trends continue to rise, the high-density 960 PRO capacities are poised to conveniently meet the needs of personal data and information storage. The 960 PRO promises additional reliability and endurance with the five-year limited warranty and up to 1.2 petabytes written (PBW), whichever occurs first, for the 2TB capacity.

You can find out more details about the new Samsung Samsung 960 Pro and 960 EVO solid state drives over at Samsung at the link below.