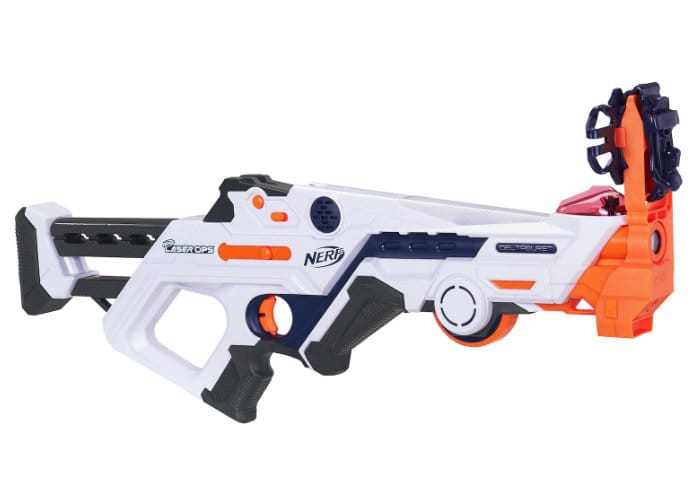 Hasbro has today unveiled a new range of Nerf Guns, announcing the launch of the new Nerf Laser Ops Pro blaster line. Capable of firing infrared bursts as well as connecting to your smartphone enabling users to keep track of ammo, health and team status and points.

Each Nerf Laser Ops Pro blaster comes complete with an armband into which you secure your smartphone, loaded with the Nerf Laser Ops companion application. Other features of the smartphone app enable owners to customise their Nerf blaster, “track performance, access real-time battle stats, get power-ups and locate opponents”.

Currently Hasbro has created two different versions of the Nerf Laser Ops Pro plaster which take the form of the Nerf Pro Deltaburst model priced at $50, capable of firing a three-shot AR burst with an included LCD screen to keep track of your hits and stats.

Next is the more affordable Alphapoint Pro version priced at $30 for one or $45 for a two-pack. This Nerf gun does not have an LCD screen but instead played sounds and triggers lights when you have been hit. Expect both Nerf Gun models to be available worldwide during August 2018. As more information is made available we will keep you up-to-date as always.