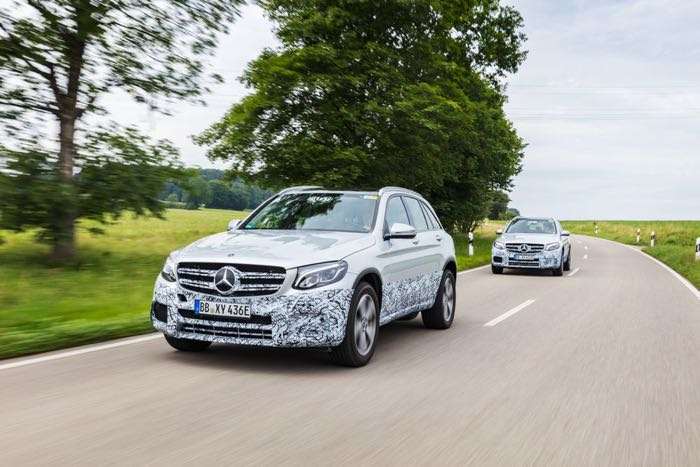 Mercedes Benz has revealed that they will be showing off their new Mercedes-Benz GLC F‑CELL at the Frankfurt Motor Show later this month.

The Mercedes-Benz GLC F‑CELL is a hydrogen powered plugin in hybrid that Mercedes has been developing.

The next generation of fuel cell vehicles from Mercedes-Benz is currently being developed based on the GLC. The pre-production vehicle of the Mercedes-Benz GLC F‑CELL, which will be displayed publicly for the first time at the IAA Frankfurt Motor Show in September 2017, combines the innovative fuel cell and battery technology into a plug-in hybrid. With it, Daimler substantiates its technology leadership and makes a statement within its CASE innovation strategy. CASE stand for the fields of: networking (Connected), autonomous driving (Autonomous), flexible use (Shared & Services) and electric drive systems (Electric). Currently, Mercedes-Benz is getting ready for the series production of the fuel cell vehicles.

The safety experts of Mercedes-Benz were able to build on almost 30 years of company experience with fuel cell vehicles. The special attention of the engineers in the development of the F‑CELL variant of the GLC launched in 2015 was directed to the integration of the safety-relevant components such as the hydrogen tanks, the gas seals and valves, and the high-voltage components.

We will have more details about the new Mercedes-Benz GLC F‑CELL when it is unveiled at the Frankfurt Motor Show later this month.