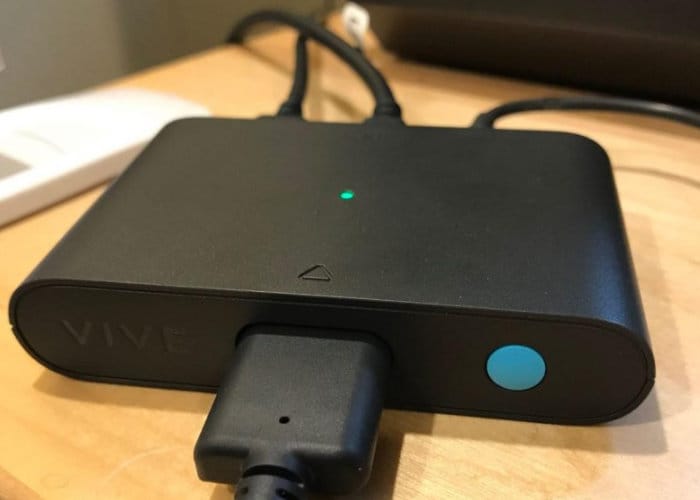 A first look at the new redesigned HTC Vive Pro Link Box has been revealed this week thanks to Cloudgate Studio co-founder Steve Bowler you recently tweeted a couple of photographs of the Vive Pro and a first look at the new Link Box. As you can see from the image rather than three connections, the new HTC Vive Pro Link Box features a single cable leading to the headset that unites power, data, and video making for a much neater connection with fewer wires to worry about. The Vive Pro’s Link Box It is also absent from an HDMI connection and instead features a DisplayPort as the only video connection option.

Specifications for the new HTC Vive Pro headset, sensors and controllers are still few and far between at the current time, but as more hardware makes its way to developers, we can expect a trickle of photographs and specifications to be made available before the hardware is made available to consumers hopefully later this year.

It has also been revealed today that Google and LG are currently developing their own high-resolution virtual reality display which will provide a staggering 1443 PPI which is a lot more than the 615 PPI of the new VR headset from HTC and especially the first generation which offers a 448 PPI. As always when more information becomes available on any new virtual reality hardware, we will keep you up-to-date as always.