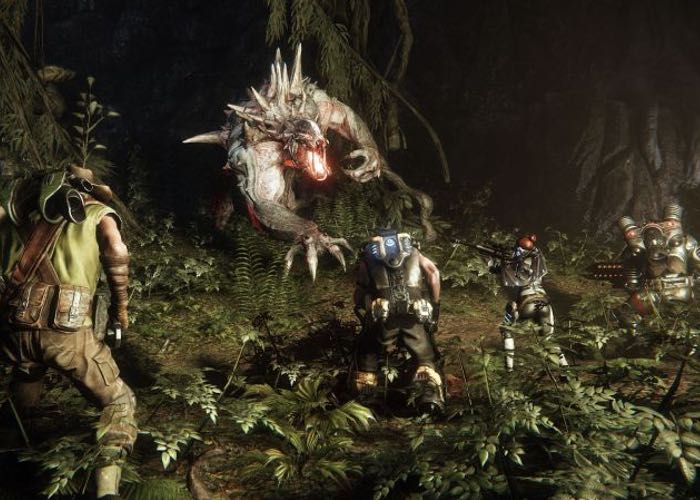 When Evolve launched the game required four hunters to stalk and kill a players controlled monsters, with the launch of the new Evolve Arena mode all players are thrown into close proximity with no stalking required.

The Arena mode offers the best of three fights and allows players to get down to business without the need to sneak around. Check out the new gameplay trailer below.

Evolve Arena Mode is now available on all platforms and will soon provide the location of Evolve proving ground tournaments. Features of the new Arena Mode include :

The short version: The Monster and the Hunter squad all get dropped into a dome. No escape, no excuses – this ain’t over until someone goes down!

– The new Arena Mode places five fixed domes on each of the 14 maps in Evolve. For those not up on your math, that’s 70 locked-down venues, ready for brawling.

– At the start, you select a map, then you’re in for a best-of-three series of hardcore firefights. The Monster and Hunters are locked in that dome until one side is eliminated. After that match, you immediately jump to another dome on the same map for round two – that continues until there’s a victor.

All the Evolve Hunters and player controlled Monster begin each match with one perk.

– Monsters start at Stage 2 with 50 percent armor, but can feed on wildlife in battle to regain armor and even evolve to Stage 3. (Though the size of the mobile arena makes this a tough task.)

– The dome isn’t coming down. So, for all you Trappers out there, your job got a little easier.

– There is no dropship timer. Once a Hunter dies in battle, they have to sit it out until the next fight.

– Players can’t change their character or perk selection between rounds, but Monster players can change their abilities. Obviously, if you’re looking to get competitive with Evolve, something like an Arena Mode is going to be awesome to play – or watch. That’s just a taste of things to come.