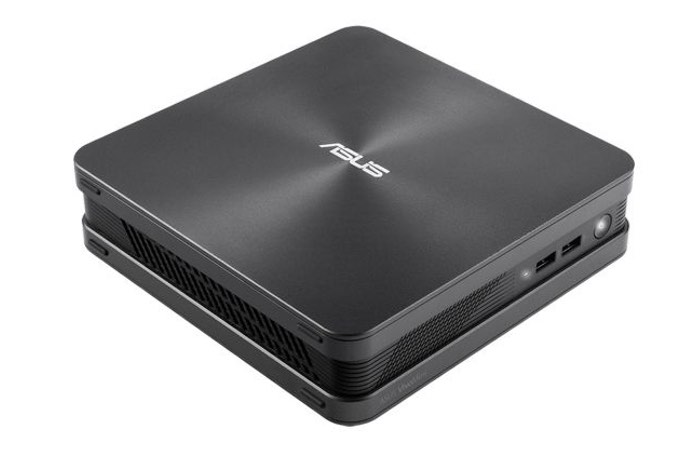 Asus this week added a couple of new mini PCs to their ever expanding range of VivoMini systems with the launch of the new Asus VivoMini VC65 which is powered by Intel’s range of Skylake processors and is also capable of supporting up to 4 x 2.5 inch hard drives or solid state disks (SSD).

The two new Asus mini PCs in the form of the VivoMini VC65 and VC65R systems have been designed to provide users with a general-purpose computer that can also be used as NAS, or the basis to create a fantastic little media server thanks to the storage options available.

Other features of the new mini PC include a massive 6 x USB 3.0 ports, HDMI, DisplayPort and VGA as well as COM ports together with an SD card reader out connectivity provided by support for 802.11ac wireless communication. Asus explains more :

VivoMini VC65 Series. The VC65 and VC65R mini PCs feature a versatile modular design with three storage and optical drive configurations1 for increased performance, productivity, and entertainment. They are the world’s smallest mini PCs that can accommodate up to four 2.5-inch SSD or HDD storage modules.

VivoMini VC65 Series mini PCs are designed for a wide range of computing tasks for the home or office, and are powered by up to desktop-grade 6th-generation Intel Core processors. The top-of-the-line VivoMini VC65R model features built-in RAID support, making it ideal for a network attached storage (NAS) or mini server system. These mini PCs feature a compact design with an embedded power adapter, and can be placed horizontally or vertically. VivoMini VC65 Series can also be VESA-mounted.

The higher-specification VivoMini VC65R features RAID support, and can be used as a NAS or mini media server for professional media production. This arrangement not only improves data access speeds and performance, but also gives users data management flexibility. RAID also provides data redundancy and resiliency, and is suitable for data management in hospitality or commercial establishments.

Unfortunately no information on pricing or worldwide availability has been released as yet Asus, but as soon as information comes to light we will keep you updated as always. For more information in the meantime jump over to this week’s Asus press release via the link below.