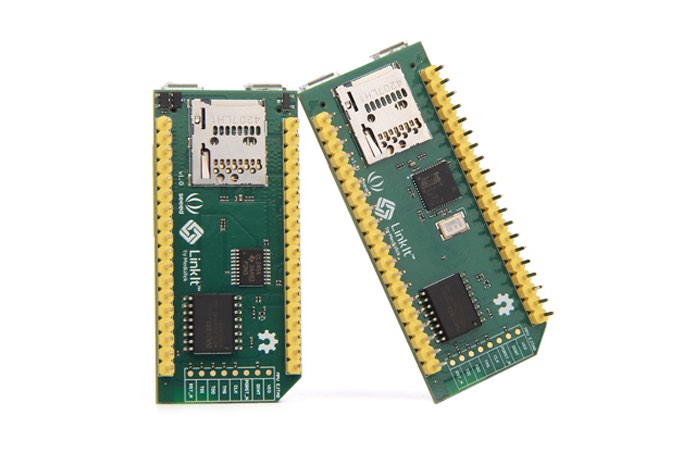 A couple of new and very small Internet of Things development boards have been made available worldwide this week in the form of the LinkIt Smart 7688 SBC which has been created by MediaTek Labs.

The new LinkIt Smart 7688 development platform has been created for those looking to develop Internet of Things (IoT) applications, with the aim to “extend the LinkIt family of development platforms to the open-source and web developer communities” says MediaTek.

Both LinkIt Smart 7688 boards include a MT7688AN SoC, 128MB RAM, 32MB flash, and WiFi. The Duo adds an Atmel ATmega32U4 MPU for Arduino compatibility. The platform is designed for advanced WiFi-based devices such as IP cameras, surveillance devices, smart appliances, and WiFi gateways that make use of cloud services, says MediaTek.

The COM-like SBCs are each equipped with a microSD slot, a micro-USB host port, and a micro-USB port for 5V power input. On the Duo, this second micro-USB port can also handle data signals. There’s also a pin-out for GPIO, I2C, SPI, UART, PWM, and Fast Ethernet interfaces. The standard Linux-based model, which measures 56 x 26mm, also offers I2S for audio. The MCU-based, 61 x 26mm Duo model instead adds ADC and SPIS.

The MediaTek LinkIt Smart 7688 and 7688 Duo development boards are now available to purchase worldwide from Seeed Studi and are priced at  $12.90 or $15.90 respectively. For more information on the new Internet of Things (IoT) boards jump over to the links below.