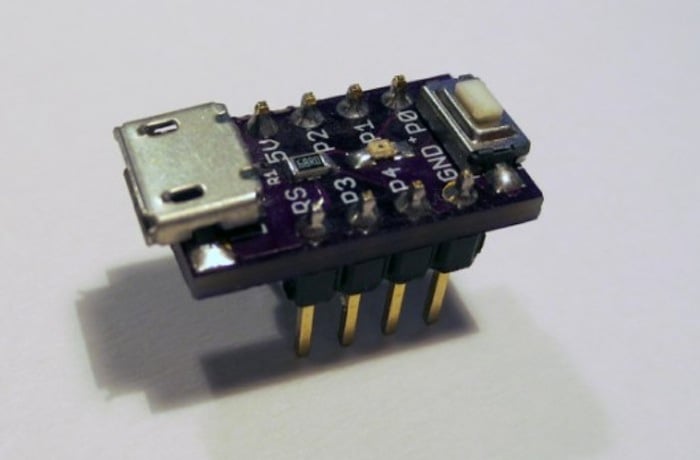 The tiny Nanite 85 Arduino development board was created as a fun project after its creator Tim had seen the Digispark and, subsequentally, the Adafruit Trinket were announced.

The idea was to create a ATtiny85 based development board based on a USB bootloader and optimised for the ubiquitous 170 point mini-breadboards, explains its creator. The result was the tiny ATtiny85 based Arduino Nanite, that measures just 0.4 x 0.5 x 0.6 inches in size.

The Nanite 85 is 20 percent smaller than the already small OLIMEXINO-85S which also claimed to be the worlds smallest Arduino compatible board earlier this year, but now looks like it has lost that title, for the time being. The creator of the Nanite 85 explains a little more about the Arduino board :

“Apart from the size considerations, the Nanite also uses a neat circuit trick to share a single pin with the LED and the reset button. The circuit of the board is shown below, the circuit attached to the reset pin, PB5, is to the right.

Apart from the LED output, user interaction and soft-reset button, PB5 can also be used as a simple serial debug output. While there is USB debug functionality in the Digispark, it can often not be used due to resource constraints or when you want to use the USB port for a different functionality.”

For more information on the tiny The Nanite 85 Arduino development board jump over to the creators website for full details.