MSI has announced the launch of some new gaming hardware that will allow gamers to build a compact gaming PC that would be perfect for use in the living room. One of the components is a new mini-ITX mainboard called the MSI Z871 Gaming AC. The board is designed to use 4th Generation Intel Core, Pentium, or Celeron processors. 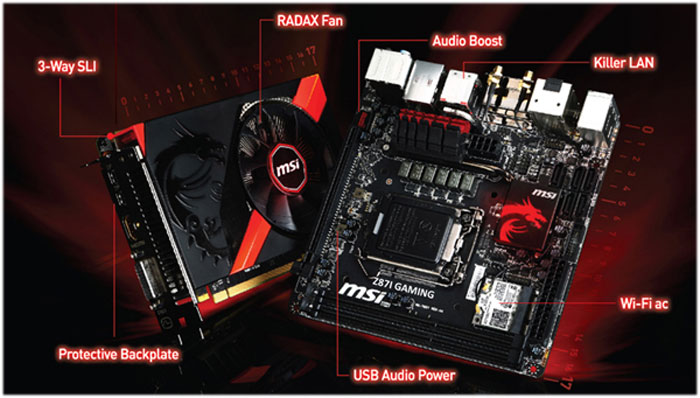 The chipset of the mainboard is an Intel Z87 Express and the board has integrated Killer Networking tech. The mainboard has five SATA ports and a DisplayPort output. It also has a HDMI output. The other hardware product is a small video card designed for mini-ITX machines.

The video card is called the MSI GTX 760 Gaming ITS. The card is very small at only 13cm long and can fit into tiny computer cases. The card has 2048 MB of GDDR5 RAM running at 6008 MHz. It also has a base clock of 1006 MHz. The video card has DVI, HDMI, and mini-DisplayPort connectivity options. The card measures 170 x 111 x 41mm and has a special cooling solution. The cooling solution promises performance and quieter operation. Pricing and availability are unknown.