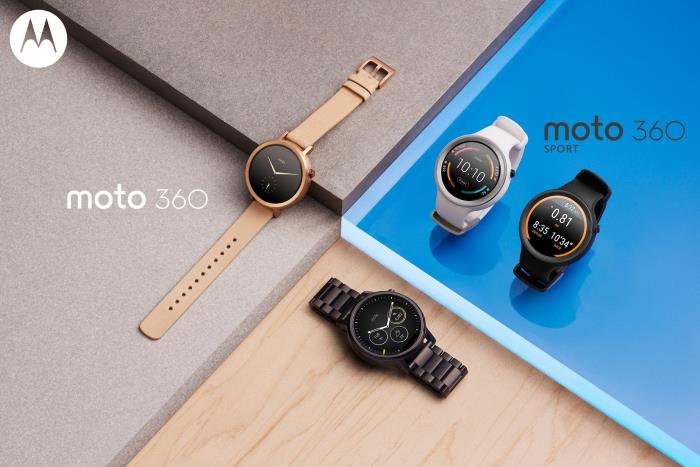 Motorola has announced its latest collection of the Moto 360 smartwatches. It turns out the rumors were  correct as the company introduced two new smartwatches, including the Moto 360 and Moto 360 Sport.

Motorola is giving out more options and customization options to users with the latest Moto 360 smartwatch, as customers will get the ability to customize the watch according to their own needs through Moto Maker, such as additional bezels, colors, materials, even a new double wrap band.

With the new Moto 360, the company has improved the design and features, adding the crown a little higher than the previous iterations as well as improved battery life and customization options. It also offer quick release bands so users can easily swap between leather and metal bands in seconds. The wearable runs Android Wear so you can get several apps up and running based on your requirements, and get notifications without taking out your smartphone every now and then.

Next up is the Moto 360 which is targeted more towards fitness enthusiasts. It comes with a Built-in GPS accurately tracks your speed, distance, and pace, as well as a heart rate monitor to track the beats per minute as you continue with your workout.

The company claims that both smartwatches, the Moto 360 and Moto 360 Sport, offer users with a battery life of up to two full day.

Moto 360 will hit retail across North America, Latin America, Europe and Asia. Customers in the US will be able to pre-order their new Moto 360 starting today from Motorola.com, Bestbuy.com and Google Play Store. The smartwatch will be available by late-September at Nordstrom, Best Buy and Verizon. As far as the pricing is concerned, it will vary depending on the style and customizations you opt for, but it will range in between $299.99 to $429.99.

There are no pricing or availability details available for the Moto 360 Sport, but we’ll update you as soon as we hear anything about them.

In the meantime, check out the video below: