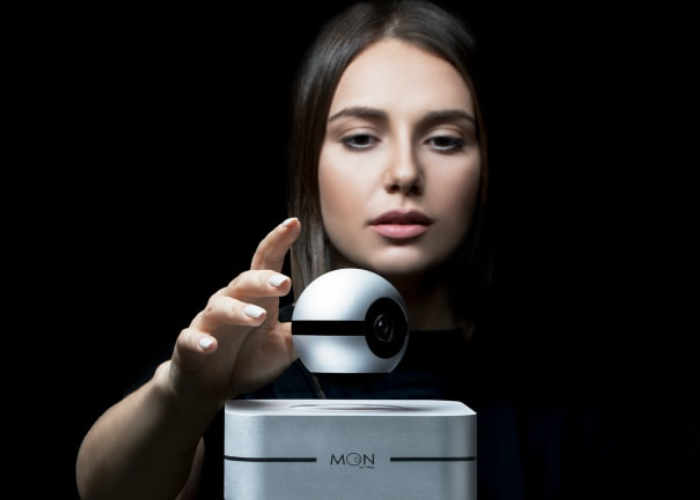 1 Ring has created a new smart home security system called Moon which has raised more than $250,000 thanks to over 1000 backers via the Indiegogo crowdfunding website. Blasting past its required pledge goal of $45,000 with still 12 days remaining on its campaign. The unique home security camera is suspended above the smart hub allowing it to detect event direction and provide 360 degree vision. Watch the demonstration video below to learn more about Moon which its creators say is the “world’s most innovative Smart Home Security Solution”.

Features of Moon include :

The creators of moon explain little more about its inspiration, design and functionality :

The Moon by 1-Ring is the most advanced and versatile Smart Home Solution and a Security Camera in the world.
It features a revolutionary stabilized 360° levitation technology and allows easy integration of modern Smart Home and legacy devices into your personal Internet of Things. The proprietary technology used in the Moon provides for a noiseless, jerk-free and fully controllable levitation that has no equal on the consumer market. The Moon by 1-Ring can rotate smoothly and without delay in any direction and is charged wirelessly for 24/7 uninterrupted operation.

Unite your home and office appliances into your very own Internet of Things using the Moon by 1-Ring as the central Smart Hub. Combining major home automation standards, inbuilt sensors and a programmable IR Blaster the Moon by 1-Ring allows you to remotely control your home from anywhere in the world. Automate your daily routines with the moon Commander app to make the most out of your free time.

For more information and a full list of all available pledges jump over to the official Indiegogo crowdfunding campaign page by following the link below where pledges start from $149 with shipping expected to take place during March 2018.