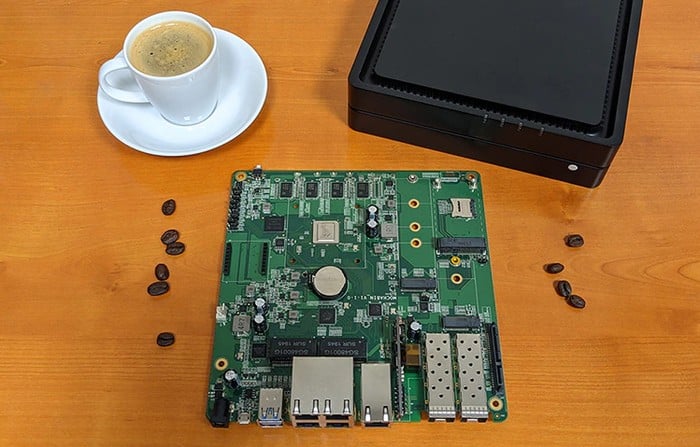 Globalscale Technologies has created a new open source quad core networking board designed to provide users with high-speed connectivity using the latest Wi-Fi 6 standards, 5G and 10 Gigabit Ethernet. The Mochabin is designed for a variety of Firewall, Networking, SDWAN, and NAS applications.

Backer early bird pledges are now available for the creative project from roughly $159 or £215 (depending on current exchange rates). “The Mochabin builds upon the ESPRESSObin community and experience by adding a fanless quad core ARM A72 processor clocked at 1.4Ghz. We have increased from the previous maximum of 2GB DDR3 to now 4GB or optional 8GB DDR4. Most importantly the Mochabin has native 10G networking via an SFP+ cage as well as flexible slots for M.2, PCI, and MiniPCIe interfaces.”

Assuming that the Mochabin funding campaign successfully raises its required pledge goal and the project progresses smoothly, worldwide shipping is expected to take place sometime around May 2022. To learn more about the Mochabin networking board project review the promotional video below.

“Mochabin is designed to support 4G and 5G applications via the m.2 interface. These can be used for cellular backhaul and communications to replace the ISP modem. With the OpenWRT and Replica One software, the Mochabin can be a open source router with multi gigabyte support and 4x Gb LAN.”

“Mochabin powered by Cubbit. CubbitCell is a distributed NAS company that recently raised 7 Million Euro Venture Capital following up their successful Kickstarter campaign. The original Cubbit Cell used our ESPRESSObin platform as the networking heart of the device. We are following up on this partnership by porting the CubbitCell distributed NAS solution onto the quad core Mochabin opening up faster networking and processing speeds”

For a complete list of all available special pledges, stretch goals, extra media and more features for the networking board, jump over to the official Mochabin crowd funding campaign page by following the link below.