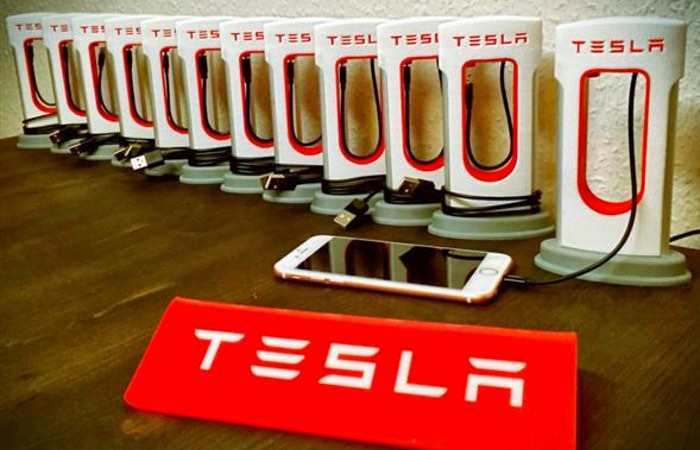 Tesla fans might like this mini 3D printed Tesla smartphone supercharger that has been created and designed by Martin Hansen, who is a 3D printing enthusiast as well as a Tesla owner from Germany.

The larger full-scale Tesla Supercharger was originally designed to rapidly charge the Tesla’s Model S car which is currently the world’s best selling electric car and this smaller scale replica can now charge your smartphone in style.
A friend of mine showed us his new Model S in 2014. He took us for a ride to the next supercharger station and explained how the supercharger network is working. It was stunning to see, how Tesla solved the long charging time problem of electric vehicles.

I spent almost all my free-time of researching Tesla Motors and the Model S – this is the future!
Visiting the supercharger station again, the idea came into my mind: the supercharger network is the key to success for Tesla – so every Tesla owner would love to have an own supercharger at home.

All of the things are printed with my Zortrax M200 3D printer in ABS except of the white case. It can be made also in ABS, but I found a 3D print supplier who is printing it in SLS for me. The surface and general impression are much better, more plastic-wise like the real one. But anyway, you could print it yourself as well.

The Tesla car Superchargers can be found at 604 locations. These chargers are capable of providing 170 miles of range to the vehicle with just 30 minutes of charging.