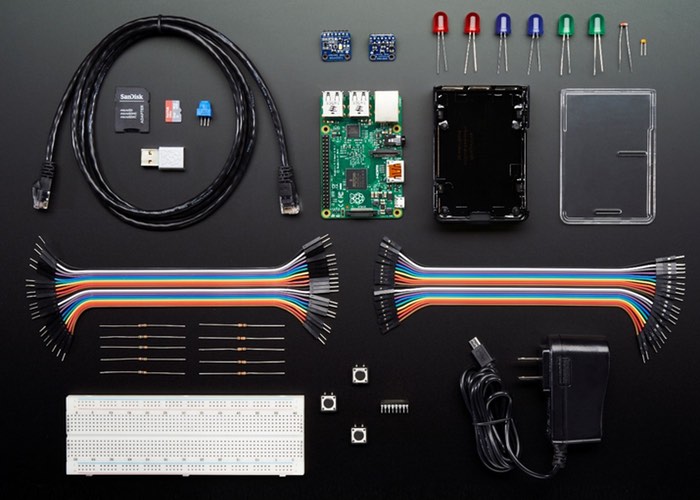 Microsoft has joined forces with Adafruit to create a new Microsoft Internet of Things Pack for Raspberry Pi 2. That but has been specifically created for those wishing to run Windows 10 on the small single board mini PC.

The kit has been designed to provide an easy way to start using Windows 10 on the Raspberry Pi mini PC and provides a variety of popular projects using the Internet of Things (IoT) to get you going.

We’re proud to announce that we are partnering with Adafruit to release a new Starter Kit designed to get you started quickly and easily on your path of learning either electronics or Windows 10 IoT Core and the Raspberry Pi 2. This kit is available now and includes a compatible set of sensors, electronic parts, wires, and cables that have been verified to work with Windows 10 IoT Core. It also has an SD card preloaded with Windows 10 IoT Core meaning you can start right away. The kit comes with getting started instructions and sample code for projects that you can make.

The Microsoft Raspberry Pi IoT Core Starter Kit is available with or without a Raspberry Pi 2 PC and includes the following components:

– Adafruit Raspberry Pi B+ Case – Smoke Base / Clear Top – We think it’s the Single Greatest Raspberry Pi 2 Model B Case Ever – though our Pi Box Plus is also nothing to scoff at.
– Full Size Breadboard – In the past, we’ve used the half-size breadboard for a lot of Pi projects – but no longer! WIth 40 pins to break out, you’re going to need some space – and that’s why we’re including a full size breadboard in this pack.
– Premium Male/Male Jumper Wires – 20 x 6″ (150mm) – These jumper wires are great for making wire harness or jumpering between headers on PCBs.  We include the longer ones so they work well with the full-size breadboard.
– Premium Female/Male ‘Extension’ Jumper Wires – 20×6″ – These jumper wires are handy equivalents of the male/male jumper wires – but with female connectors.
– Miniature WiFi Module – Official Raspberry Pi Edition – The fancy, official, and adorable WiFi Module, made by the Raspberry Pi foundation specifically for use with Raspberry Pi operating systems (and Windows 10).
– 5V 2A Switching Power Supply w/ 6′ MicroUSB Cable – The 5V 2A power adapter is the perfect choice for powering your Raspberry Pi B+ with 2 Amps of current output, and an extra long cord.
– Assembled Adafruit BMP280 Temperature & Humidity sensor – The assembled verison of an Adafruit Instant Classic.  This breakout board has a powerful BMP280 sensor from Bosh that’s good for environmental, temperature, and barometric pressure sensing.  This version comes with headers already soldered on.
– Assembled TCS34725 RGB Color Sensor – The assembled version of a longstanding Adafruit classic.  This RGB Color Sensor with IR filter and White LED comes fully assembled – with headers already soldered on.
– MCP3008 – 8 Channel 10-Bit ADC With SPI Interface – Easy to use, SPI enabled chip that’s perfect for adding 8 channels of 10-bit analog input to your microcontroller or microcomputer project.
– Ethernet Cable – 5 foot long – An ethernet cable.
– 8GB class 10 SD/MicroSD Memory Card w/ Windows 10 -IOT  This SD card comes pre-loaded with all the Windows 10 goodies you can handle.

Electronic components within the kit include :

You can also use this pack with Raspbian Linux & Python, Here’s a few Raspbian-based learn guides that are worth checking out to start. While they’re for the Model B, they will all apply to the Raspberry Pi Model B+ and the Raspberry Pi 2.