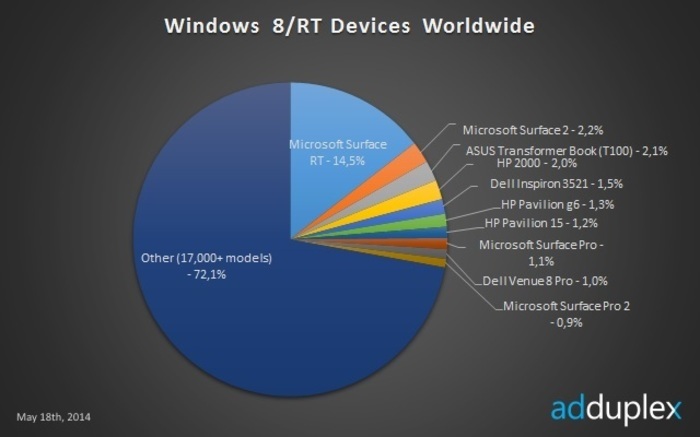 The folks at AdDuplex released their latest Windows 8 powered tablets data for the month of May, and it shows an interesting picture of how different Windows 8/RT devices are performing.

As per their report, Microsoft leads the Windows 8/RT device manufacturers list with 18.8 percent market share followed by HP and Asus with 18.2 and 11.3 percent share, respectively.

“It’s important to mention that our data is collected from almost 800 apps in the Windows Store and it’s safe to assume that these apps are used more on the tablets (and especially Windows RT tablets) than on traditional PCs and laptops, so the data is skewed towards tablet and touchscreen PCs. Having said that, it should provide a good overview of the ecosystem as a whole and specifically for developers building Windows Store apps,” according to AdDuplex.

Microsoft has scheduled an event for today where the Redmond-based company will launch the long rumored Surface Mini as well as the new Surface Pro 3.