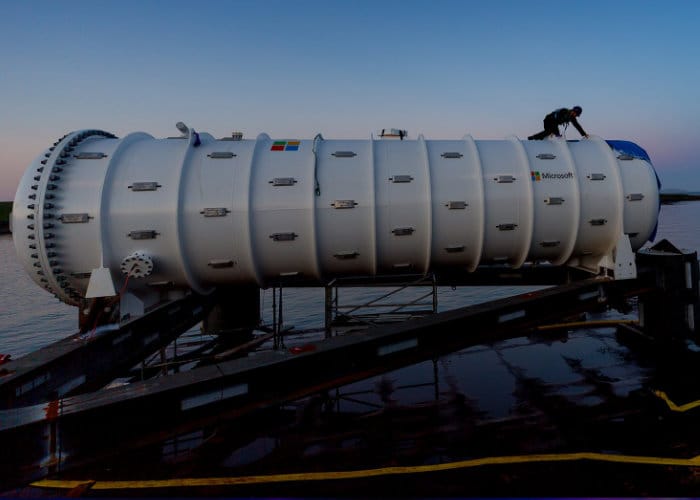 After previously testing the feasibility of underwater deep sea data centres Microsoft has this week announced it has deployed a Northern Isles datacenter at the European Marine Energy Centre. Marking a milestone in Microsoft’s Project Natick, created to investigate manufacturing and operating environmentally sustainable, prepackaged datacenter units. The deep sea data centres can be ordered to size, rapidly deployed and left to operate lights out on the seafloor for years. The first experimental data centre is approximately the size of a shipping container and is now processing workloads on the seafloor near Scotland’s Orkney Islands. Watch the video below to learn more about the deep C datacenter is being created by Microsoft.

“That is kind of a crazy set of demands to make,” said Peter Lee, corporate vice president of Microsoft AI and Research, who leads the New Experiences and Technologies, or NExT, group. “Natick is trying to get there.”

The Project Natick’s 40-foot long datacenter is loaded with 12 racks containing a total of 864 servers and associated cooling system infrastructure. The datacenter was assembled and tested in France and shipped on a flatbed truck to Scotland where it was attached to a ballast-filled triangular base for deployment on the seabed. Microsoft explains “More than half of the world’s population lives within about 120 miles of the coast. By putting datacenters in bodies of water near coastal cities, data would have a short distance to travel to reach coastal communities, leading to fast and smooth web surfing, video streaming and game playing as well as authentic experiences for AI-driven technologies.”

For more information on the new deep sea datacentre is being created by Microsoft jump over to the official Microsoft News website by following the link below.