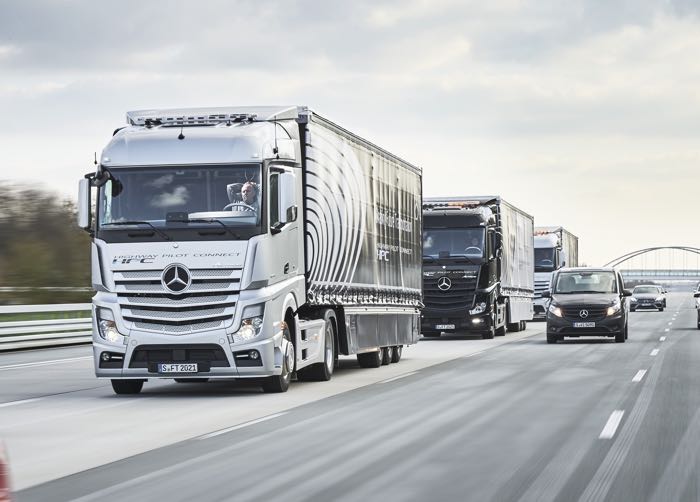 Mercedes Benz has been testing our its self driving trucks in the Netherlands, the company has started a journey of three connected autonomous trucks from Stuttgart to Rotterdam.

The trucks are expected to arrive in Rotterdam tomorrow and they are traveling on the highways in a convoy of three trucks.

Today, three connected and autonomous Mercedes-Benz Actros trucks start a cross-border convoy drive from Stuttgart to Rotterdam. Daimler Trucks, the worldwide leading truck manufacture, actively supports the initiative European Truck Platooning Challenge 2016 initiated by the Netherlands government as part of its EU-Council Presidency. Dr. Wolfgang Bernhard, responsible for Daimler Trucks & Daimler Buses in Daimler’s Board of Management, personally bade farewell to the drivers at their departure from the Mercedes-Benz museum for their two-day trip.

Daimler Trucks is the only manufacturer of autonomous trucks with official road approval worldwide and participates jointly with five other European commercial vehicle manufacturers in the rally. The scheduled arrival at the port of Rotterdam is on April 6th, 2016. The tour of the three Mercedes-Benz trucks leads from Stuttgart over Heilbronn (A81) on the highways A61 and A67 across the federal states Baden-Württemberg, Rheineland-Palatinate and North Rhine-Westphalia towards Venlo for passing the border to the Netherlands. By the European Truck Platooning Challenge the European commercial vehicles manufacturer jointly address with the Netherlands government the potential chance of truck platooning and the necessity of a harmonized, transborder regulation with the aim to facilitate efficient road transport throughout the EU.

You can find out more details about the Mercedes Benz self driving trucks at the link below.