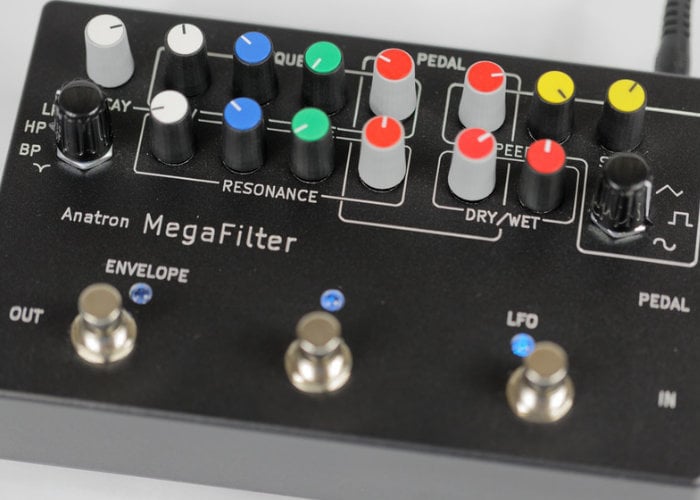 Musicians searching for a way to add powerful synthesisers style modulations to the sound of any instrument may be interested in a new versatile analogue Resonant Filter created by Derek Dearden, aptly named the MegaFilter. Watch the demonstration video below to learn more about the MegaFilter analogue Resonant Filter which has been available this month via Kickstarter and is coming to the end of its crowdfunding campaign successfully raising more than double its required pledge goal.

Early bird pledges are still available from £145 and worldwide shipping is expected to take place early next month during January 2019.

“In the late 70s Derek Dearden ran Survival Projects – a bespoke design service based in the Yes equipment warehouse in West London. He designed and built sound processing units for major rock performers, including Yes, ELP, Queen. AC/DC and Mike Oldfield. He also supplied recording studios in London, Paris, New York, Montreal and Los Angeles, several leading independent sound engineers and the BBC Radiophonic Workshop. Now he returns to his roots with the MegaFilter – the first in a projected range of top-quality effects units.

For more details and full specifications jump over to the official Kickstarter crowdfunding campaign page by following the link below. Features of the analogue Resonant Filter include:

– Separate Filter Mode selection on each channel
– Use the two channels, for Left and Right, or for two different instruments or tracks …or feed the same input to both –
– Left input feeds to both if Right input is uplugged
– Offset Second Channel controls up or down
– Sync or reverse modulation of second channel from Pedal, Envelope, or LFO
– Two CV inputs and four CV outputs to interface with modular synths