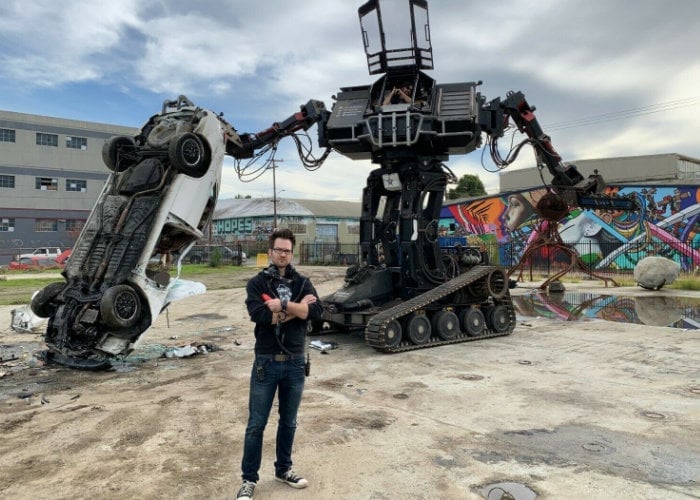 If you are interested in owning your very own MegaBot battle robot, you may be interested to know that the Eagle Prime MegaBot has been listed on eBay starting from $1 due to the MegaBot company going bankrupt after once again running out of money. Eagle Prime is a massive 15-Ton 2-Story Tall gasoline powered car-smashing piloted giant battle robot
from the world famous USA vs Japan giant robot duel. The 16 foot tall Eagle Prime robot requires two pilots to manoeuvre the beast and is already made it over the $50,000 mark thanks to 43 bids at the writing of this article.

“MegaBots took to Kickstarter to crowdfund the upgrades to the American robot. Raising over $500,000, the campaign will allow the MegaBot Mk. II to not only be able to swing punches, but to roll with them too. Get ready to witness the most incredible sports entertainment that the world has ever seen: Nation-on-nation robot combat. Multi-ton behemoths will swing punches, tearing steel armor panels off each other until one mech is left standing, while the opponent is left a heap of scrap metal.”

“In the summer of 2015, MegaBots, inc. completed construction of the USA’s first giant piloted mech. The Mk. II MegaBot is a 15-foot tall, 12,000lb robot capable of hurling 3lb projectiles at speeds of over 130 MPH. Upon completion of the Mk. II, MegaBots challenged the only other known giant piloted robot in the world to a duel. A 9,000lb robot known as KURATAS created by a group in Japan known as Suidobashi Heavy Industries.”