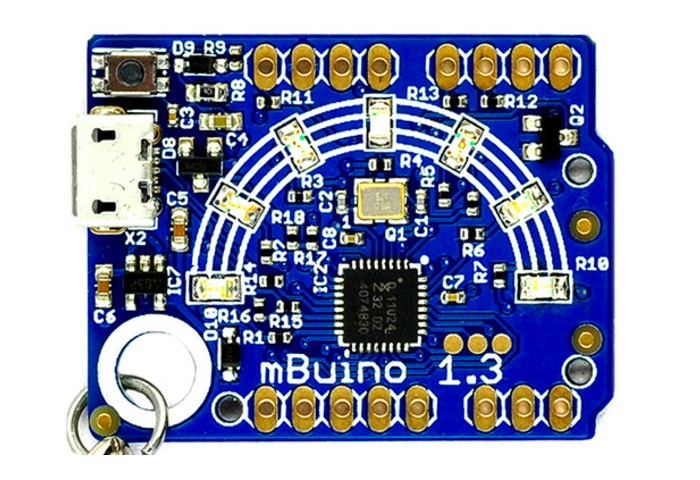 Developers and the makers looking for a more unique and programmable keychain might be interested in the mBuino a mbed keychain that has launched over on the Kickstarter crowd funding website this week.

The mBuino programmable keychain has been developed by GHI Electronics and provides a powerful circuit fitted with a NXP LPC11U24 ARM Cortex-M0 50Mhz processor enabling you to create a number of projects.

Other features of the mBuino keychain include 32K FLASH / 10K RAM, SPI, I2C, UART, USB and the device can easily be programmed using mbed’s online compiler IDE, as well as any other ARM Cortex-compatible IDE. Its creators explain a little more about the mBuino programmable keychain and what you can accomplish with it.

“It is really limitless with what you can do with a 32bit 50Mhz micro! Projects can be as simple as blinking the on-board LEDs, then turn this cool “blinky” into a pendant or a clip. But the mBuino has much more to offer. Its pinout includes UART, SPI, I2C, Analog and PWM!

Those can be used to control motors on a robot, to control addressable LED strips, and to read all kind of sensors, like temperature and acceleration. Or even add a display and create a little video game like we have in this example. Through a breadboard, mBuino is connected to a piezo for generating sounds, a joystick to move the player and a color display.”

So if you think the mBuino programmable keychain is something you could use to make your keychain a little more interactive and useful, visit the Kickstarter website now to make a pledge and help mBuino become a reality.