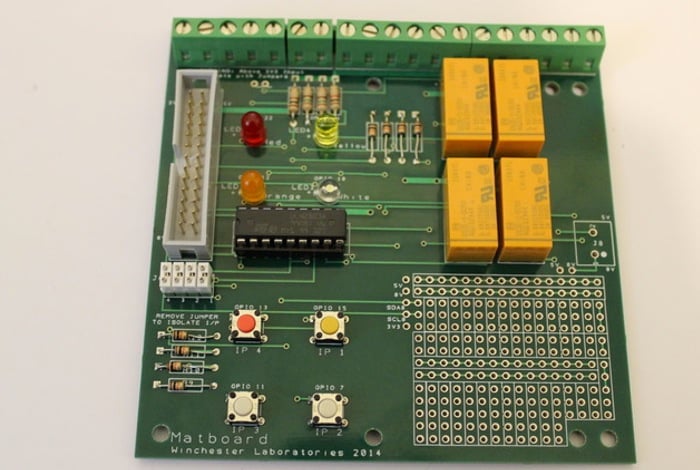 Hobbyists, makers and developers that enjoy using the Raspberry Pi mini computer for their projects, might be interested in a new Raspberry Pi expansion board called the Matboard which has been created by Winchester Laboratories based in the UK.

The Matboard Raspberry Pi expansion board has been specifically designed to provide users with an extremely easy-to-use addition to their Raspberry Pi.

Enabling makers and hobbyists with even the most basic knowledge of electronics and programming code to be able to create a variety of different Raspberry Pi powered projects. Watch the video below to learn more about this new Raspberry Pi expansion board that can help add extra functionality to your Raspberry Pi projects easily. Its creator explains :

“The Matboard was designed to be very easy to use with the basic GPIO commands that can be run from within Python or Scratch. It plugs directly into the Raspberry Pi GPIO bus with a standard ribbon cable connector.

The board is immediately usable as it has four coloured LEDs and coloured switches . Straightaway you can start testing your project ideas and developing code. Using the LEDs and Switches to confirm outputs are working and inputs are being read.

The board also has 4 x relays which are rated at 2A – 250VAC and 220VDC. (Note : For safety reasons we do not recommend using the Matboard with AC mains supply).These are connected to terminal blocks that can be used to control anything with a switch. For example lights, water pumps, valves, security strobes, garden lights, motors etc. The Raspberry Pi uses 3.3V logic and the GPIO pins are connected directly to the heart of its microprocessor so we have used a darlington pair transistor buffer to drive the relays and buffer the inputs making them safe to experiment with.

There are also four switch inputs connected to a terminal block, that can be used to receive a signal from a switch, pressure pad, PIR sensor or other circuit that the Raspberry Pi can react to. These inputs can be used either by connecting switches or by applying an external voltage of up to 30VDC without damaging the Raspberry Pi.”

For more information on the new Matboard Raspberry Pi expansion board jump over to the Kickstarter website for details and to make a pledge for either a kit or fully assembled board. For more details on Raspberry Pi displays and HATS jump over to our essential guide.