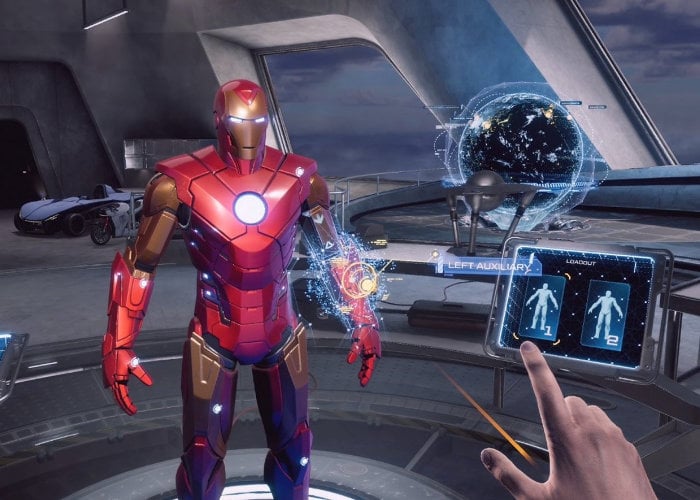 Yara Abou Samra Producer at development studio Camouflaj as taken to the official PlayStation blog to reveal more about the Tony Stark garage within the new Marvel Iron Man VR game. Launching early next month on July 3rd the garage area allows you to tweak and customise your Iron Man suit.

“Early on in development, the team at Camouflaj knew that bringing the iconic garage into virtual reality would be essential. We knew it had to be a place where players could get the full-fantasy of the inventor, Tony Stark. We wanted the garage to empower players to tinker with and upgrade their suit and get more powerful as they got deeper into the campaign, looking stylish along the way.

One of the things that makes Marvel’s Iron Man VR so fun is the amount of freedom you have in flight and combat. You can fly with one hand, while blasting enemies with the other. At the Armor Station, you can attach homing missiles on your left hand and cluster bombs on your right with the Research points that you’ve obtained. You can even customize two unique loadouts to suit different play styles, which is a feature much beloved by our most hardcore players here at Camouflaj. One of my favorite loadouts is pairing the powerful Anti-Armor Missiles with the shotgun-like Scatter Shot, allowing you to deal heavy damage to enemies both at a distance, and at point blank.

In addition to gameplay-driven upgrades, you can also unlock incredible-looking Armor Custom Decos to look awesome while you take on Tony’s deadliest foes. With the base game, pre-order bonus and the Digital Deluxe Edition, there are 16 decos in total (seven with the base game, one from playing the demo, four if you purchase the digital deluxe edition, and if you pre-order any edition you will receive four). They are ranging from the “Vintage” deco, to my personal favorite, the “Hornet” deco.”