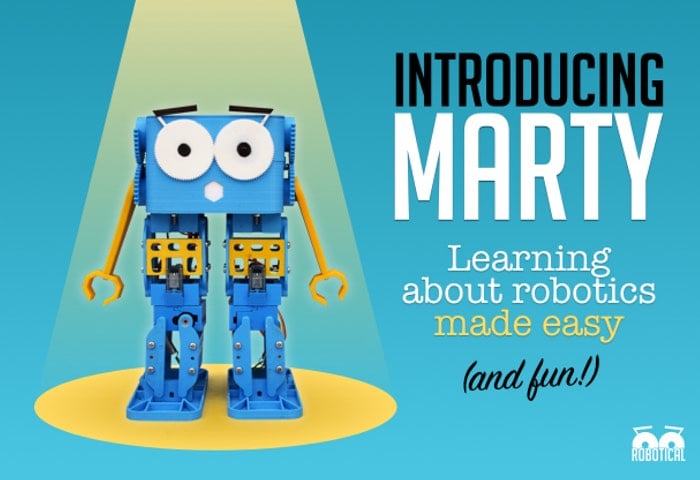 Raspberry Pi enthusiasts or those looking to learn more about robotics might be interested in the new educational system which is being created by Alexander Enoch based in Edinburgh within the UK.

The new robotics education system is aptly called Marty The Robot and provides an easy and low-cost effective way of learning more about robotics in a fun and painless way.

Watch the video to learn more about the robotic learning system that is in the final hours of its Indiegogo campaign.

Marty is a fully programmable, WiFi enabled walking robot for kids, makers, educators, and for anybody who just wants a cute robot. Marty makes learning about programming, electronics, and mechanical engineering a fun and engaging process. He is designed to be customisable with 3D printed parts, and is also completely upgradeable. He’s is even compatible with single board computers like the Raspberry Pi!

Out-of-the-box Marty can be controlled remotely over WiFi, but you can also program him in a variety of programming languages. Kids and beginners can learn with Scratch, where coding is as simple as clicking and dragging blocks. Experienced programmers can control him using more powerful programming languages such as Python and C++, or state of the art robotics tools such as ROS.

Marty was developed by Dr. Alexander Enoch over the last year and a half originally as a side project during his PhD (for which he was building bigger walking robots) at the University of Edinburgh. We’ve now got several functional prototypes and we’re ready to start producing kits, but we need your support to make it happen!

For more information on the new Marty The Robot jump over to the Indiegogo website for details by following the link below.