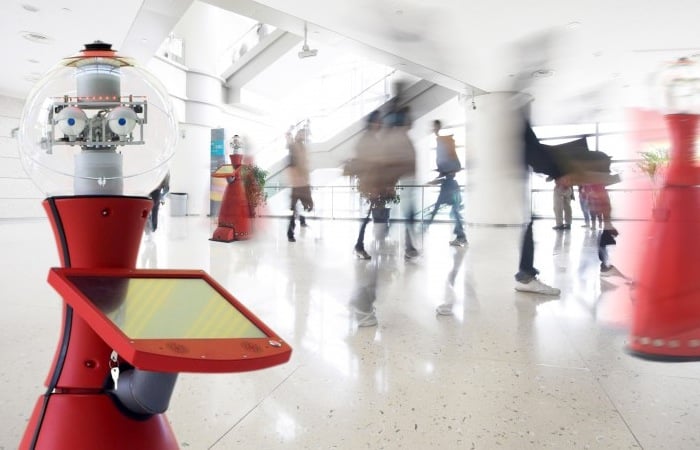 Visitors to the London’s Natural History Museum this week will have the pleasure of meeting the new Robot Linda that will be part of the museums current exhibit entitled Robot on Patrol.

The robot Linda is the centerpiece of the museum’s Robots on Patrol exhibit running from June 9th to 13th 2014, and is one of a number of exhibits for Universities Week 2014.

The Linda robot has been designed and created by the University of Lincoln’s School of Computer Science and will mingle with the public and visitors to the Natural History Museum.

Ten robot’s name comes from the a reference to “Lindum Colonia,” the ancient name for the city of Lincoln and Robot Linda is one of 6 robots built for the £7.2 million or $12 million STRANDS project. Which aims to produce robots suitable for working with security guards and staff in nursing homes. The robots are either programmed with a map of their surroundings all are capable of creating their very own 3D maps out their surroundings as they move.

Enabling them to work in a human environments that over time will probably change as furniture is moved and people come and go throughout the areas the robot is working in. The Linda robot has been designed to operate independently and can remap the 3G generated navigation maps on-the-fly as objects may be moved or people walk through the area changing the environment. Dr Marc Hanheide who will be manning the exhibit this week explains:

“It’s not just about providing a care home or security robot,”-“We are trying to enable robots to learn from their long-term experience and their perception of how the environment unfolds in time. It will have many possible applications and taking Linda to the Natural History Museum is a fantastic opportunity for people to see how robots like this will, one day, be able to aid and assist humans in a variety of roles.”