The City of London has started rolling out and installing high tech bins that are equipped with LCD screens to keep pedestrians up to date on the news and travel services.

Called Renew Bins the project has been developed over the last couple of years and is now looking to makes in mark in the 2012 Olympics which will be hosted in London later this year. The Renew Bins are equipped with two LCD screens and can be enabled to also act as mobile hotspots. 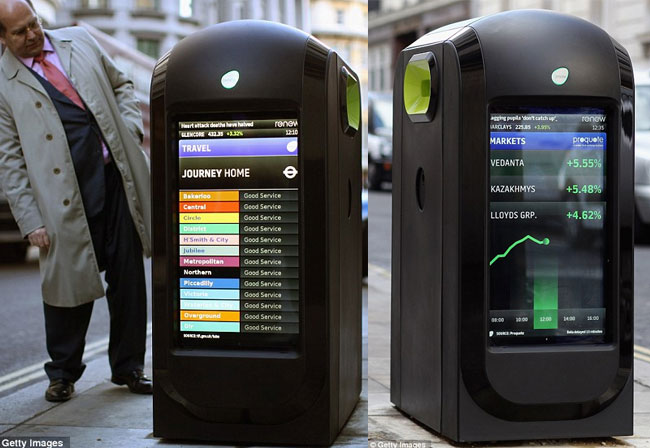 The company behind the project Renew is backed by private investment from City workers and entrepreneurs. Each bin costs £30,000 to build and install and are large enough to contain around a typical wheelie bin volume in rubbish. Over the course of their 21-year contracts they will cost Renew £500,000 each, says the Daily Mail newspaper. Robin Hepburn, a senior member of the team at financial communications company Waughton told the Mail Online:

“There are currently 25 units (that’s 50 screens) around The City with a view to 75 more being installed between now and the Olympics. Those supplying content so far include the London stock exchange and The Economist. It would be nice to have a sponsor, like Barclays with the Boris bikes, but it’s not critical. It’s taken at least five years to get to this point and we’re delighted to finally get them out on the streets.”

What are your thoughts on the new LCD bins? Good or bad idea?