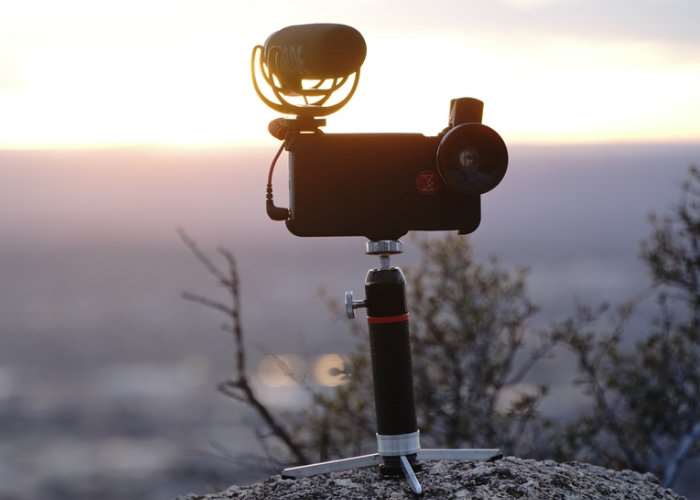 Watch the demonstration video below to learn more about the MARK 1 which is being created by Monarch VII and launched via the Kickstarter crowdfunding website to raise the $35,000 the team require to move into production.

The team at Monarch VII explain more about the inspiration behind the iPhone live streaming system.

The camera quality of our phones has gotten so great, but to really have a pro set-up it’s ideal to be able to mount a better mic, additional lighting, and a variety of lenses to your phone at the same time, while being able to mount the phone to a tripod.

When we looked at what was readily available on the market we noticed some design setbacks. The phone housings and cases that were available were either way too bulky to use as a case, didn’t protect the phone itself, or were too expensive.  We wanted a phone case that could actually be used as a phone case to protect the phone, sleek enough to fit into your pocket comfortably, and act as a professional mobile phone rig when you needed it.

The Mark 1’s two reinforced cold shoe mounts, an improved lens well, and an Aluminum reinforced tripod mount ensure an endless number of shot configurations. Ultimately, the best camera is the one you have with you. Now with the Mark 1, a professional set-up will be in your pocket at all times ready to capture the moments ahead. A great option for those who stream live footage on Instagram and Facebook or to create unique perspective by mounting your phone in new places.

Jump over to Kickstarter to make a pledge from $35 to receive the MARK 1 iPhone case during May 2017.