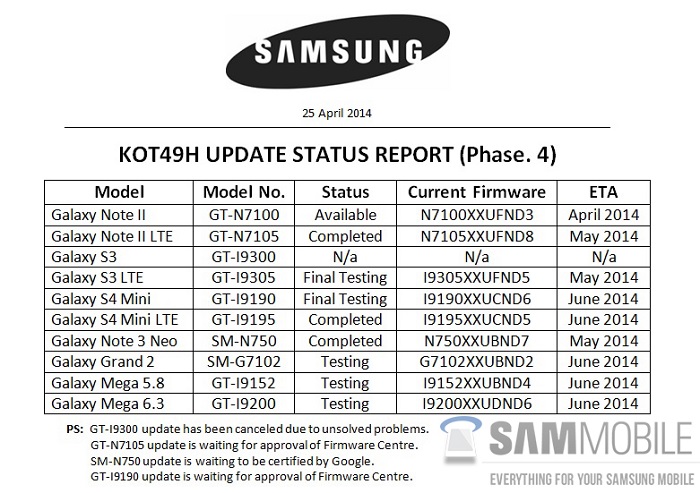 Samsung has released the latest Android 4.4 KitKat update for a bunch of its high-end devices, including the Galaxy Note 3 and Galaxy S4, in most of the regions.

For those of you who are rocking older Samsung devices, and want to know if you will be lucky enough to get the chocolaty taste of Android 4.4 KitKat, the folks at SamMobile received a list of devices which will be updated to the latest update, as well as the time frame when users can expect it to land.

The list includes most of the popular Samsung devices, including the S4 Mini, Galaxy Grand 2, Galaxy Mega and Note 3 Neo. Some of them are in the testing phase while others are waiting completed, and waiting for approval from firmware centers and Google.

There’s a band news for those of you who are waiting for the update to land on the Samsung Galaxy S3 (GT-I9300). If the above document is legitimate, the update for the Galaxy S3 has been cancelled due to unsolved problems. SamMobile reports Samsung is having trouble with the implementation of TouchWiz UI and system apps which failed to load.

The same tipster also said Samsung is working on the Android 4.4.3 update for the Galaxy S5, and some of the devices in the list might get updated to Android 4.4.3 instead of 4.4.2.

We’ll update you as soon as the update starts rolling out for the above mentioned devices.