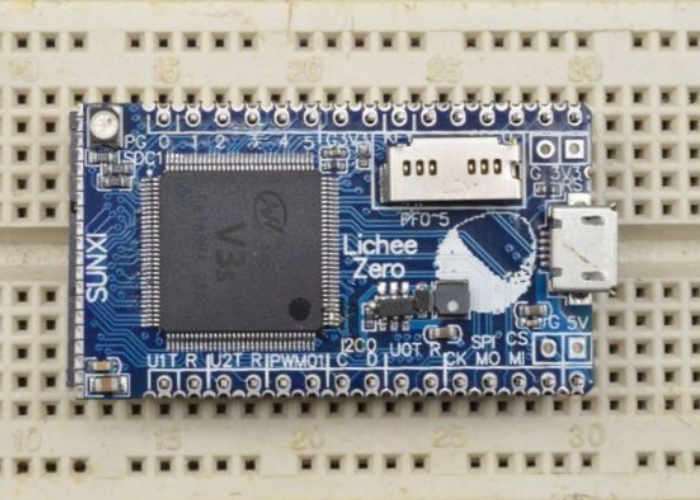 Wu Caesar based in China has this week launched a new Indiegogo campaign for a tiny Linux mini PC which is available to back priced at just $6 and is fully breadboard-compatible and includes on board LCD/WiFi connector, LoRa / MIC Array extendable.

The Lichee Pi Zero is based on the Allwinner V3S offering an ARM Cortex-A7 CPU, max 1.2GHz, 512Mbit DDR2 integrated and can boot from on board SPI Flash or TF card.

It’s developers explain some of the advantages of the Lichee Pi Zero when compared to the Raspberry Pi Zero or Arduino:

– $6 without wifi, and $8 with wifi.It is much cheaper than arduino, and even cheaper than the newest Raspberry Pi Zero W.
– Zero is clocked at 1GHz(24M~1.2G，step by 24M), while the idle temperature is about 40℃(104℉), current consume less than 0.1A, much better than Rpi0 or other H3 based boards.
– Zero have a common FPC-40P RGB LCD connector, you can connect LCD directly!No video cable needed, you can DIY mini “laptop” easily~
– Zero run the newest linux-4.10 kernel now~
– Zero is designed for both DIY and mass production! Plug&Play, Breadboard-compatible, and all pins stamp hole out!
– Lots of peripheral modules, and typical applications: Powerful LoRa Netgate and Amazing Micphone Array is coming soon!

Lichee Pi Zero is a micro, extensible, open source linux module/computer. It is only a little longer than SD card, and can be plugged to breadboard directly! Zero is well designed for the pin out, both for DIY(60pins 2.54mm out) and Production (able to SMT). It is able to connect to the LCD directly! No video cable needed, you can DIY mini “laptop” easily. There is a customized TF WiFi Card for Zero, plug or stack to enable wifi! Powerful LoRa Netgate and Amazing Micphone Array is coming soon!

For more information and full specifications jump over to the official Indiegogo crowdfunding campaign via the link below.