LG and Verizon recently announced their latest Android smartphone, the LG Spectrum 4G LTE and now the handset is available on Verizon Wireless for $199.99 when you sign up to a new two year contract with the carrier.

The LG Spectrum comes with support for Verizon’s 4G LTE network and it features a 4.5 inch HD display, the display comes with a resolution of 1280 x 720 pixels, which means it can display HD videos and content in 720p. 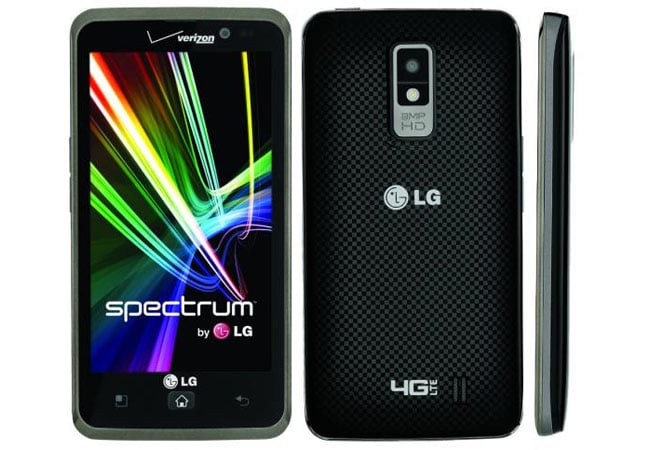 Other specifications on the LG Spectrum include a dual core Qualcomm 1.5GHz processor, plus 1GB of RAM,  and it comes with Android 2.3 Gingerbread out of the box, LG has announced that it will get Android 4.0 Ice Cream Sandwich at a later date.

The LG Spectrum also features an 8 megapixel camera with an LED flash and auto-focus, the rear camera is capable of recording full high definition video in 1080p.

Up front there is a 1.3 megapixel camera for video chat, it also features 4GB of built in storage, and a microSD card slot which can take up to 32GB cards, although it comes bundled with a 16GB microSD card.

The LG Spectrum comes with 801.11 a/b/g/n Wi-Fi, Wi-Fi Direct, DLNA, and it can also be used as a Wi-Fi hotspot with up to 10 different Wi-Fi devices. You can find out more information over at Verizon Wireless.